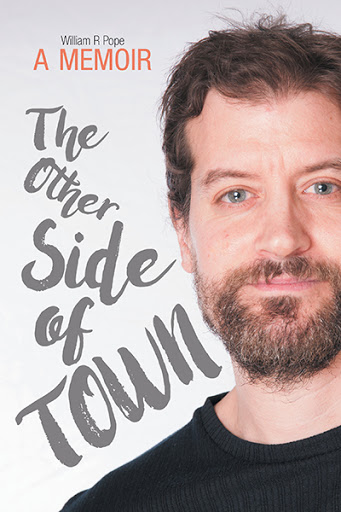 The Other Side of Town
a memoir by William R Pope

An experiment at being honest is this book. While names have been changed to protect the innocent, all stories are true.  The book starts at the beginning and continues chronologically, highlighting parts of Bill Pope’s life chosen for their narrative characteristics. Bill attempts to examine and satirize important transitional periods—from his humble beginnings growing up in Bridgewater, happy in his own simplistic world, to moving to his grandparents Orville home where he struggled to contend with the realities of his own limitations and a childhood friend that sporadically appears to get him into trouble.

Bill doesn’t retreat back into his overly simplified world to protect himself, however, but instead decides to meet the world head on no matter how cruel it can be at times. In the actual world people fail all the time despite their best efforts and Bill fails too, often in spectacular fashion.

As Bill moves from prepubescence to his teenaged years, he’s distracted by a healthy sex drive, a desire to be a rock musician, and a wish to find meaningful employment and the perfect work schedule.  These are lofty goals to be sure; especially for a kid that has yet to prove himself. Humility may be some of what Bill lacks here; because while he desires to rise to great heights, is keen on dismissing some of the intermediate step to achieve it.

Mixed in with humorous puns and storytelling, is a revealing glimpse into Bill’s Pope’s thoughts on love, relationships, sex, ambition and music. If there was ever a book that attempted to examine the human condition of an average person’s life in interesting and surprising ways, this book is it.

"It was so good! It doesn't sound like jokes a lot of the time which is brilliant. I was laughing out loud! " ~ George Verongos LS

William was born in a log cabin. Scratch that. Before William became the author of this book his life was much simpler and secluded; and known only to his fellow computer geeks as Bill. Instead of authoring sentences he was authoring computer code for a large company. His journey towards writing prose began way back when he was in college though. While there, he had to write a twenty-page paper on the history of radio. He found that he was at least as good a writer as he was a web developer—perhaps an even better writer. It seemed he could always spin a yarn, but could he put it to paper? As it turned out he could.