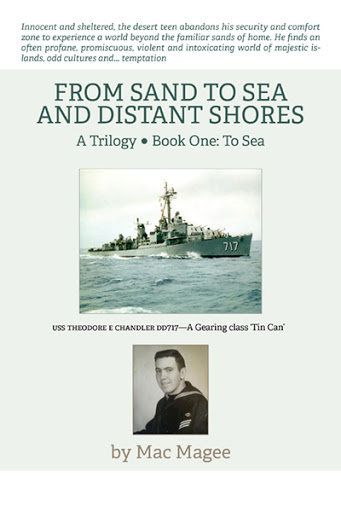 Book One: To Sea
From Sand to Sea and Distant Shores
by Mac Magee

With incredible clarity and in vivid detail, this 10-year Navy veteran, explains and involves you in the action of the times … the Cold War in the Pacific Ocean during the mid to late 1950’s from Boot Camp and basic training, to service aboard a U.S. Navy Destroyer: the USS Theodore Edson Chandler (DD-717). Enjoy liberty ashore in Foreign ports in this first book of his trilogy; From Sand to Sea and Distant Shores. Be his shipmate as you:

• Endure tear gas, an oil fire and nearly getting drowned during Basic Training.

• Become one of the crew of a five-inch gun turret, when a buddy loader drops a live projectile while firing.

• Experience A ONE IN A MILLION HAPPENING! the in-your-face terror of a full-blown typhoon that threatens to capsize your ship as a shipmate gets washed overboard … Then back onboard again!

• Learn everything a destroyer does from Gunnery and sub-chasing to stopping weapons-smuggling in the Formosa Strait.

• Enjoy exchanges of American life styles and customs, as you live and eat with shipmates from New York to Tennessee.

• Almost panic, when not only officers from your ship, but the Captain too; decide to throw you overboard at night into the black-as-ink waters of Subic Bay, P.I. and you can’t SWIM!

You won’t have to have been or be, a sailor nor even in the Navy to read and understand this book! Explanations, foot notes and “Backgrounds” will make it clear for you to move through without stumbling (if you can catch your breath!)

A destroyer sailor, “Thanks, Mac, for putting it all down for me to recall in Book One: To Sea of your trilogy”. C.J. Ver, SM3 USNR

Editor’s comments: “this is stuff the naval Historians will drool over. Your writing is very crisp and clear and occasionally quite “salty”. The description of your boot camp incident with the D.I. was hilarious and the ‘Crossing the line’ initiation was perfectly disgusting … THE CHAPTER ABOUT THE TYPHOON IS ABSOLUTELY GRIPPING! Very well-written and descriptive. Loved the way you drew out the suspense during your time with Satchiko. Kept me guessing all the way! Well done! You really grabbed my attention quickly. Well done! “ Ed. Friesen Press 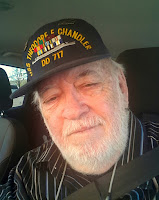 Mac Magee is a 78-year old (2016), U.S. Navy veteran; Radioman 1st Class, who has served ashore in Europe and at sea in the Pacific, during the Cold War, between 1955 and 1965. Looking back at those ten years, he says, “I believe what I saw, learnt and experienced around the world, has given me an accurate and useful perspective on life, not only then, but especially in the years following my service and I feel sharing those experiences with others might be interesting; hopefully entertaining and perhaps beneficial to anyone who has life left to live and reads this first book in my Trilogy. For those with perhaps less life left, maybe it will be a reminiscent look backwards to their own similar experiences with which to relate, re-live and appreciate. I would feel remiss in not sharing mine.”

A high school graduate, Mac completed two years of junior college, concentrating on Graphic Communications. He’s worked as a Senior Computer Operator, a Sales and Customer Service Representative in a national cable company, Security Guard, a programmer and electro-mechanical repairman, drug and alcohol recovery representative, printer, national living trust company advisor/liason for 50 lawyers and financial planners and editor of that company’s nation-wide newsletter and finally; Customer Service Manager, Public Service: worked with special needs children and was a volunteer Reserve Police Officer. In 2015, he became a published author with his first book about his online dating experiences, The Woman Board. At 77 and Referring to his belated entrance into authoring he says, “Better a late bloomer; than a dead bud!”

Aside from writing, he enjoys Amateur, or “Ham Radio”, Weather Observation and reporting, TV watching, model ship-building and “Life with wife, Vel”; the 63rd and final woman of his arduous online searching and dating. “Arduous? Well, somebody had to do it!”, he tritely quips They live in Cane Beds, Arizona…far from the salty sea but, upon another sea; the desert; a sea…of sand. “Odd that they’re so different yet alike: You can get lost on either, and die of thirst on both.”

Book One: To Sea will be available in the FriesenPress Bookstore soon.