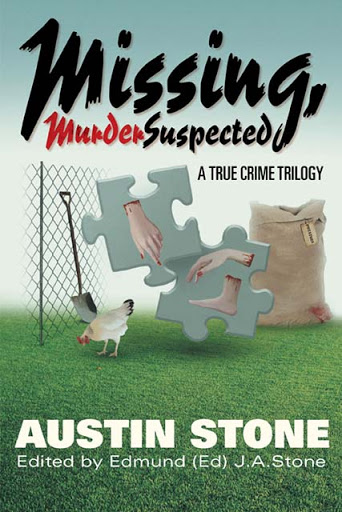 Missing, Murder Suspected is a crime novel based around a trilogy of true crime events.

The first, “Love and Hate amongst the Chickens” was publicly known as ‘The Chicken Run Murder‘ of 1924, where John Norman Thorne murdered his fianc’e Elsie Cameron.

The second, “A House of Horror” was also based on the true crime known as ‘The Buck Ruxton Jig-Saw Murders‘ of 1935. This crime involved the double murders by Dr.Buck Ruxton of his wife Isabella and her nursemaid Mary Rogerson.

The third, “Four Sacks for a Shroud” is about the ‘Luton Sack Murder‘ of 1943, where, during WW2, a London fireman, Bertie Manton was driven into a killing rage by his wife Rene.

“Although at times this may read as fiction, only a minimum of ‘author’s license‘ is involved, every fact being authentic, every conversation based on the evidence of witnesses. In this way it is hoped that the reader will be able to appreciate fully the tension and drama, as well as the workings of providence, which often conspire to bring tragedy into the lives of ordinary people.” — Austin Stone

AUSTIN STONE (1904-1979) was a well known crime novelist and BBC playwright between the years 1936 and 1955. Most of his books and plays were based on historically True Crime events and were published in several languages for overseas readers. Prior to “Missing, Murder Suspected”, his last published book was “In the Shadow”, a novel based on the ‘Camden Town Murder‘ of 1907, published in 1953. This famous murder has since been possibly linked to ‘Jack the Ripper’ by the famous American crime novelist Patricia Cornwell and also as depicted by artist Walter Sickert.