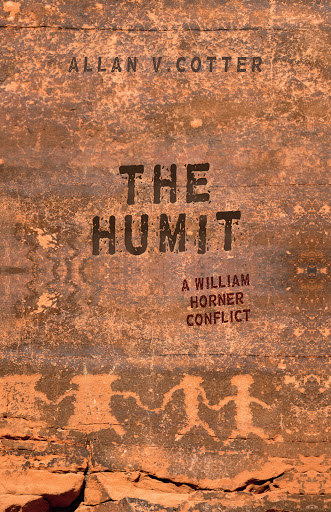 The Humit
A William Horner Conflict by Allan V. Cotter

Fresh off his adventure with futuristic stealth technology, United Nations investigator WILLIAM HORNER and his sidekick Arthur Bradbury are thrust headlong into a helter-skelter cross-country chase. Only, they’re not the ones doing the chasing. Join Horner as he and Art struggle to ensure the safety of the Humit, a mysterious and impossibly advanced robot, and Cynthia, its enigmatic and secretive handler, as the four of them travel from San Francisco to deliver a presentation to the United Nations in New York. Chasing them are the wealthy and eccentric Robles-Bryces and their private army of fanatical survivalists, not to mention the FBI, who are tracking the trail of destruction and bodies across the country, unsure of who’s causing what. What is the Humit, really? What do their pursuers want? And what waits for them at their destination? The Humit is a smart, funny adventure that takes the reader on a wild ride through contemporary America and contemporary issues.

ALLAN V. COTTER has worked as a special effects technician for thirty-eight years and as a fire fighter for thirty-two. He has worked on very large movies and been in very large fires, and has so far survived both despite numerous encounters. Before those twin careers, he worked in demolitions and civil works. In his spare time, he is a classical stone carver, often depicting science or science-fiction themes, and blending classical and modern artistic expressions. He also loves reading about politics and the intrinsic farce of it all. Cotter has taken his technical knowledge, love of spectacle, and interest in international intrigue, and turned them towards telling exciting, explosive stories which address the complex and often ironic machinations of our world governments.

Allan lives in Port Hope, Ontario, Canada, with his wife of 37 years. The Humit is Allan V. Cotter’s second novel, and the second WILLIAM HORNER novel, following the exciting debut Sleight of Light.

The Humit will be available in the FriesenPress Bookstore soon.