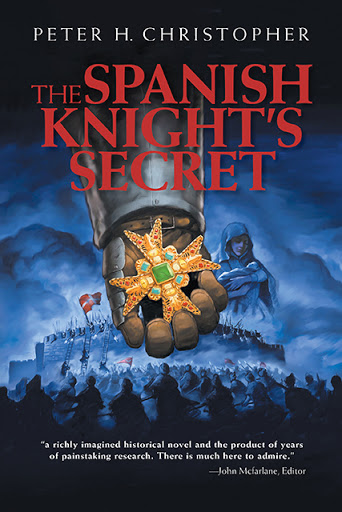 In 1565, the young Spaniard Juan de Guaras receives an exquisite brooch in the shape of a Maltese cross from his parents to commemorate his becoming a Knight in the Order of St. John. But within four months de Guaras dies in the defense of Fort St. Elmo against the Ottoman Turks during the Great Siege of Malta; and the brooch meant for his beloved, Maria, and their son—is lost to history.

By chance, 450 years after the siege, watercolors commissioned by the Order in the 17th century for their ledger are on display for the first time in the Museum of Fine Arts in Valletta. Kiyoko Bartolo, a professor from the University of Tokyo who specializes in jewelry of the European Renaissance, recognizes the drawing of de Guaras’ brooch. Famous throughout history not only for its magnificent gems, but as a key to the wealth that de Guaras had obtained as a corsair raiding the richly laden merchant ships of the sultan, Suleiman, the Magnificent. Kiyoko learns that it was last recorded in 1923 when the Communist Party inventoried the jewelry belonging to the Russian royal family that was held in the Hermitage. Twenty years later, during the German Siege of Leningrad in World War Two, it mysteriously disappears. Kiyoko, determined to locate the Maltese brooch, enlists European colleagues she’s befriended during Renaissance seminars to assist her in her search. However, the closer they come to finding the brooch, the more resistance and violence they meet from unknown parties who want the brooch, and its secrets, for themselves.

“Unreservedly recommended and all the more impressive when considering that "The Spanish Knight's Secret" is author Peter H. Christopher's debut as a novelist, his genuine flair for originality is truly remarkable, and his storytelling skills are notably extraordinary.”

"...a unique blend of modern international thriller with historic warfare make this an appealing historical work."

Peter Christopher weaves a wondrous novel around the facts of the historic Great Siege of Malta, the pivotal 16th Century battle in the European Christian struggle against Islam. He breathes vibrant new life into Juan de Guaras, an actual Knight of St John and hero of the Siege. De Guaras is used to stunning effect as narrator and only-too-human protagonist, so much so that, by the end of the novel, we're fervently praying for victory for him and his fellow Knights. Parallel to this historic tale, Christopher unfolds a present-day, international, plot-driven thriller not unlike Dan Brown's best. 'The Spanish Knight's Secret' is that rare creature: a comprehensively informative novel of historical fiction, but also tremendously entertaining.

--Andrew Smith, author of 'Edith's War' (Gold Medal for Fiction at the Independent Book Publishers' Awards in New York in 2011), and his latest novel: ‘The Speech’.

The Spanish Knight’s Secret is an engrossing, detailed book based on The Great Siege of Malta and it’s a relevant piece of history from 1565 weaving two stories separated by 450 years into a taut and frightening plot complete with a murder mystery and affairs of the heart. The Spanish Knight’s Secret is an insightful way to combine history with the tribal aspirations we are still living through. It is a book you can’t, nor do you want to, put down.

...a richly imagined historical novel and the product of years of painstaking research. There is much here to admire.

This is Peter H. Christopher’s debut novel. A world traveller and a photographer for forty-five years he draws on his experiences, observations, love of history and six years of research to bring the reader this exciting mystery/thriller historical novel. Although based in Canada he has visited his holiday home on Gozo, one the Maltese Islands in the Mediterranean, on an annual basis for thirty years.

The Spanish Knight's Secret will be available in the FriesenPress Bookstore soon.