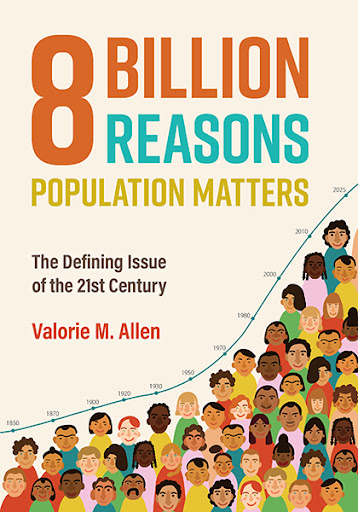 Have you been wondering why our environmental progress has been so disappointing?

The world is about to hit a staggering population level of EIGHT BILLION people living on one small planet. In this provocative and critically acclaimed must-read, Valorie M. Allen dares to connect those very few dots. As you read this book, the realization sets in that the long and good fights by environmental groups and world aid groups are all for naught as every gain is soon overwhelmed by the pressures of more growth.

Eight Billion Reasons Population Matters takes an in-depth and eye-opening look at our planet’s greatest threat, that of too many people depleting the Earth’s resources and contributing to climate change. While providing plenty of facts and data, it does so much more. It reaches us at an emotional level, inviting us to consider what we are destroying and to mourn the losses we are inflicting upon ourselves and all other life-forms.

Never before have so many people been so misinformed about something as important and urgent as population. After decades of dire warnings and scientific findings, it is clear that humankind must finally confront the myths and taboos that are holding us back from addressing our population crisis. This book is a brave and rare effort to demystify the population puzzle and steer us toward a more intentional and promising future, rather than allow human nature to blindly forge a path forward that leaves no space for a healthful existence.

Allen offers a thorough analysis of a world reeling from environmental, social, political, and economic crises; then she goes further to provide a treasure trove of solutions and success stories that we can all take to heart. With this book the reader finally understands how simple the way forward to sustainability could be.

This book has legs that will carry it around the world! Indeed, it must!

"Valorie Allen’s research and writing are essential to understanding how human society can settle down into a sustainable path. Allen’s new book “Eight Billion Reasons Population Matters” clearly articulates the importance of addressing population. It is also part of another important focus: Public education."

—Rex Weyler — founding member of Greenpeace International, author of “Greenpeace: The Inside Story

"Population growth is not a victimless crime. It hurts those already here and further damages a planet reeling from over-exploitation. Val Allen’s books are treasure troves of information and perspective serving up a veritable researchers’ bonanza."

"Val Allen’s book is a crash course on the population issue. It is a trove of information both for novices and those who have had a long-standing interest in the issue. It can serve both as an inspiration and tool kit for anyone who wants to address the problem."

"Val Allen’s book is a great resource for students to learn about population and its connection with numerous vital issues. It makes those links admirably well."

VALORIE M. ALLEN of Alberta, Canada has spent the last 35 years working with environmental, population, and animal rights groups, and was awarded the Canadian Volunteer Award for her efforts. She is a proud member of Population Institute Canada, and this experience along with her many years in the education field, revealed the dire need for this book of hope and solutions. This work follows her first award-winning book, Growing Pains—A Planet in Distress, as she continues to shine light on humanity’s most critical failure. Read more on her website at www.populationinsync.net.