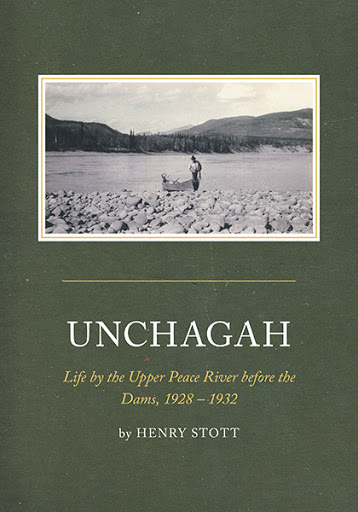 In 1928 Henry Stott, accompanied by his younger brother Tom, set sail from England to Canada. He left behind a comfortable life in England and an education in classics to spend five years living in the remote Upper Peace River country of British Columbia largely travelling on foot or by boat. They learned to shoot rapids, enjoyed fishing remote lakes and rivers and developed the skills to work a trap line. Unchagah charts this journey in an age when survival depended on common sense, physical strength and courage. Henry’s account contains many fascinating anecdotes about the remarkable people who made the area their permanent home and the animals which provided them with food and a livelihood.

Henry Broadbent Stott was born in 1895 in Bradford, West Yorkshire, England the eldest of four children. He was educated at Bradford Grammar School, where he was a brilliant scholar, and read History at Lincoln College, Oxford.

The First World War interrupted his studies when conscription was introduced in 1916 and he was imprisoned as a conscientious objector. After the war, although not a Quaker, he worked with the Friends War Victims Relief in Poland until 1923.

After finishing his degree he returned to Bradford until 1928 when his brother Tom, who had been farming in British Columbia, paid a visit home and persuaded Henry to join him in Canada.

Henry already had a passion for fishing but, as unlikely as it seems, it was in the bush country he was introduced to Astrology which he practiced with great skill until suffering a stroke in 1975. The last horoscope he prepared for himself predicted both the stroke and his death in 1981.

Umchaka is the story of the adventure he shared with his brother Tom in the Upper Peace River country of British Columbia.