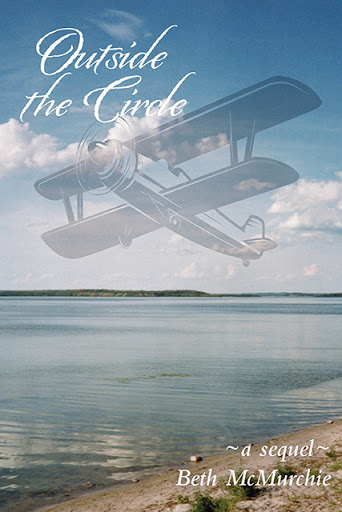 Outside The Circle
A Sequel
by Beth McMurchie

The Atkinson family is back with a sequel to Golden Ribbons covering post World War One to 1923. Todd and Rachael, now in their late twenties, see their future within a society of changed social norms. Todd, in his role of healer to the injured and broken soldiers, becomes infatuated with a beautiful nurse/ ambulance driver but, after a few false starts, Todd and his bride make a home together in a dilapidated mansion with a resident ghost. Rachael is given the task of promoting further education for women – formerly in male-dominated occupations during the war. She is relentlessly pursued by a mysterious and obsessive scholar, and is plagued with the dilemma that must take into account their differing positions regarding the inclusive/ exclusive aspect of married life.

Joey leaves the three-way farming operation to wander without destination. Along the way he is detained in a minute community within the Cariboo-Chilcotin area of British Columbia’s interior where he finds an opportunity that could lead to a dream of establishing a riding stable. A dashing young Bush Pilot arrives in the B.C. interior community, making himself unwelcome, but later, in an act of compassion, he embarks on a journey of self discovery involving misadventures and coincidences that eventually finds him in the middle of a circle.

Beth McMurchie was born and raised on the Alberta prairies, and was employed as a social worker in child protection. Beth has four children, four grandchildren and three great grandchildren. She continues to live in Mission, British Columbia.