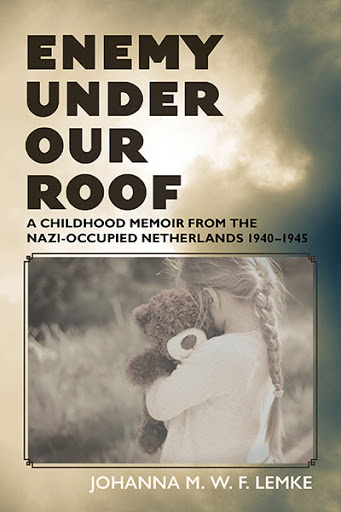 Enemy Under Our Roof
A Childhood Memoir from the Nazi-occupied Netherlands 1940 - 1945
by Johanna M. W. F. Lemke

Riveting, inspiring, and informative, Johanna’s often graphic memoir, Enemy under Our Roof, is based on the author’s experiences in war-torn Hengelo, the Netherlands in World War II. From nights of terror spent in the cellar during air raids to the dreaded razzias, when friends and neighbours are taken away to the camps, adolescent and adult readers will be spellbound as they are transported back to 1940’s Europe.

Told through the eyes of young Cobie from ages four to nine, the narrative adopts an innocence that stands in stark contrast to the realities of war. When hordes of Nazi bombers invade the Netherlands, Cobie’s peaceful, orderly world is turned upside down. Gradually she must learn to cope with fear, loss, cruelty, and despair. As she matures, she tries to make sense of the horrors of war and her Christian faith – a faith she maintains amid disillusionment and questioning.

Her most trying experience occurs when a Nazi officer billets himself in her home by force, and she is confronted with issues of hatred and forgiveness. She must battle both the enemy without and within, uncovering valuable truths in the process. Throughout the ordeal she is sustained by her older brother’s sense of humour, her faithful friends, and the love and courage of her parents, who keep hope alive until the long-awaited day of liberation.

Enemy under Our Roof is dedicated to three Canadian war veterans, and concludes with a moving tribute by Anthony Lemke to one of the liberators, William McKeever. Affectionately known as “Uncle Bill” to the children, he billeted with Johanna’s family for four months after the liberation of Hengelo (O). By hailing Canada as the land of opportunity, he encouraged them to emigrate to Canada, and offered to become their sponsor. In the summer of 1953, Johanna and her family reunited with “Uncle Bill”, putting down new roots in the town of Brockville on the majestic Saint Lawrence River.

As a retired elementary school teacher, Johanna took writing courses at Algonquin College and the University of Ottawa. At Carleton University, she studied Children’s Literature as part of her combined English/German major. She is a member of the online WriteforKids/CBI organization and a regular contributor of articles and children’s stories to her church’s quarterly magazine. When she is not writing, Johanna enjoys reading, research, nature, architecture, science, classical music, theatre, art, and travel.

Enemy under Our Roof is Johanna’s first novel.