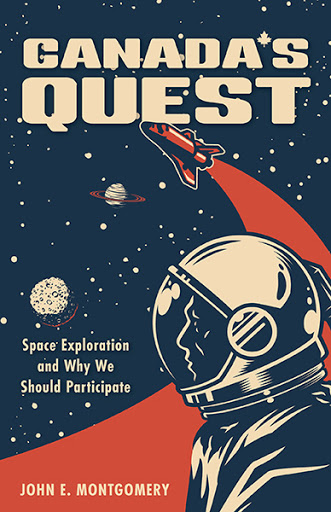 Canada’s Quest
Space Exploration and Why We Should Participate
by John E. Montgomery

Canada, as a nation, needs a new focus. In the last half of the 20th century, the country was striving to find its national identity, and we clustered along the warmth of our southern border, but not so close as to get burnt. Problems between the French- and English-speaking parts of our country threatened to tear us apart, but we managed to resolve them as best as we could. There continues to be unresolved issues with the treatment of the Indigenous peoples of Canada. But, the country is going through a process of understanding, reconciliation and healing. Then there are regional differences, each region trying to promote a national agenda that addresses their own needs. A large geographically dispersed country like Canada will always have regional differences, but these differences also contribute to the strength of our country. The overarching question is how best to build a country with a level of prosperity and quality of life that all can enjoy. If this goal can be achieved then most of the issues that divide us will tend to go away.

We need a new national dream. That dream could be outer space, the new ocean, the final frontier. Canada needs to expand its activities in space. We need a space program that will inspire Canadians and drive technological innovation. We need to create a new industry that will continue to sustain our high standard of living. Both as a way to unite the country and as a way to ensure Canada will be a strong and prosperous nation well into the 21st century.

John’s interest in space exploration began at a very young age. Although he went on to study and practice chemical engineering, his curiosity for space remained strong. Upon his retirement, John began researching space exploration and the impact that a strong space program would have in uniting the country, both politically and economically.