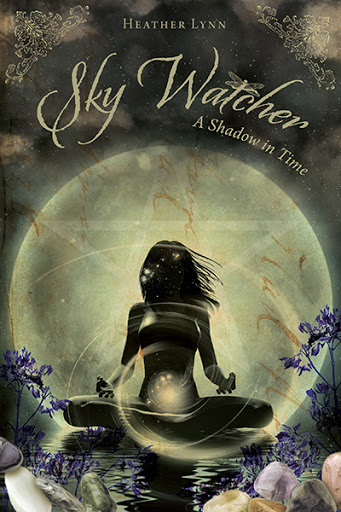 Sky Watcher
A Shadow in Time by Heather Lynn

Charlotte Harper’s life isn’t going as she expected. She had to change her course of studies, her ex-boyfriend has hooked up with her best friend, and she misses her mother desperately since her passing.

Searching for meaning and direction, she pours herself into her family history, researching her roots. When she learns of a possible ancestor named Elizabeth from the early nineteenth century, who was hung for the crime of witchcraft, she is determined to try to save her fate. Charlotte explores the strength of her Wiccan beliefs and the powers within her stones, preparing a spell to transport herself back in time nearly two centuries.

She arrives at a small, sleepy town on the shore of Owasco Lake, New York. Intending to stay just long enough to save her ancestor, she creates a cover story and attempts to fit in, but after waiting for weeks with no word of Elizabeth, she immerses herself in the community. She works in the General Store to earn her keep and uses her knowledge of herbs and medicine to help those in need. She soon forms strong bonds with those around her, finding herself drawn into the simple and fulfilling life of a bygone era, and even falls in love—more deeply than she ever thought possible.

As the deadline of the execution nears, visions of the future begin to plague her and those around her. Can she truly save Elizabeth and undo what happened almost two centuries ago? With two lives on the line, she knows she must face the consequences of meddling with time, even if it costs her everything.

Heather Lynn, born in Toronto, Ontario, lives with her husband and three sons, just north of the city. Her education in biology and health sciences supported an ongoing interest in the potential of herbal healing. When she’s not writing, she enjoys family time, working in her garden and learning more about the ‘power’ of stones. This is her first novel.