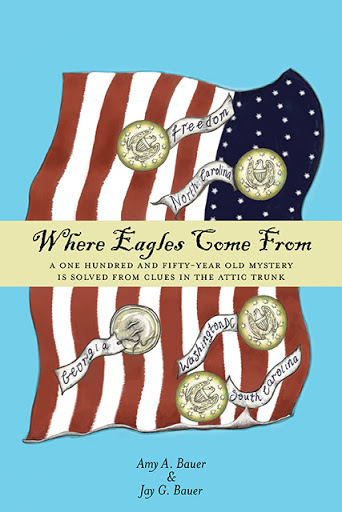 Where Eagles Come From
A One Hundred and Fifty-Year Old Mystery is Solved From Clues in the Attic Trunk
by Amy A. Bauer and Jay G. Bauer

Where Eagles Come From is a fictional story but it is based on true life events of a young, African American girls’ life, in modern times. Masie is an only child who lives somewhat lonesome in southern California with her mother and father. Since her parents are professionals and often distracted with work, Masie becomes fascinated in finding a family beyond herself as an only child. Her annual summer vacations have her spending time at her Grandma’s house in the low country of South Carolina; a world away from California. Time spent here introduces Masie to clues of a family past found in a trunk kept away in the attic. These attic discoveries send Massie and her Grandma on adventures that reveal family ties to a “Freedom Seeker” born into slavery in Georgia. This “Freedom Seeker” joined the 135th United States Colored Troop after the emancipation as part of General William T. Sherman’s Army. This find results in the family coming together, after forty years of being disconnected, to learn about the contributions their relative made for his family and our nation. This is a celebration for Masie!

The book highlights life experiences of a young girl growing up in the south, in modern times, and making discoveries about her family that were left to be forgotten. Discoveries that changes a young girl’s life and perspective. Additionally, the story shows how the differences in generations can find common motivations and needs that, when they work together to overcome them, can result in a very special, meaningful bond.

Where Eagles Come From is a piece of short, young adult fiction based on true events. After discovering the trunk in her grandparents attic, that had been forgotten for about 40 years. Masie and her Grandparents begin piecing together their family history and are fascinated by the five brass buttons with Eagles on them... This was an absolute pleasure to read!

Presents the economic, social and cultural development of Americans of African Descent in South Carolina from slavery, the Civil War, reconstruction, and the impact of internal immigration on current families. The writing style reflects disarming youthful innocence. Everyone with heritage in the South can related to this story.

The author, Amy Bauer, was raised on an island outside of Savannah, Georgia where she learned to appreciate and value history. The rich historic roots of Savannah exposed her to the work of genealogy and has kept her intrigued enough to have worked in the field for thirty years. One of the more fascinating subjects she and Jay Bauer have studied extensively involves the army of William T. Sherman. Amy and Jay have researched the many files and pension records of the men of the 135th United States Colored Troop founded and formed under Sherman’s leadership.

Through the author’s life, years of study and research (as well as a determination to uncover untold or forgotten stories), they have created a fictional, true-to-life story contained herein. This book shows how learning a family’s genealogy can change a family story; or, introduce you to one that you never knew existed.

Where Eagles Come From will be available in the FriesenPress Bookstore soon.