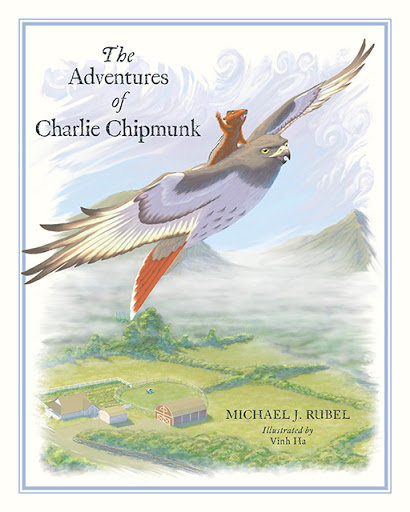 The Adventures of Charlie Chipmunk
by Michael J. Rubel

Making one’s way in the world can be hard even at the best of times. But for young Charlie Chipmunk, who is swept away from his home in a tree during a flash flood, it is downright scary. Separated from his family, Charlie must master new skills to survive. Luckily, Charlie has spunk and the ability to make true friends, including a red-tailed hawk, who teachs him how to live in his new surroundings on a farm. Soon Charlie learns that bush peas are his favourite vegetable, the farmer’s wife sometimes keeps cookies on the windowsill to cool, and that he should avoid the farm cat Christine at all costs! As Charlie learns and grows, he realizes there is just one thing missing in his life – a mate. So he takes matters into his own paws and begins an exciting quest to find one.

The Adventures of Charlie Chipmunk is an enchanting animal story that will both entertain young readers and remind them that everyone has a place in the world if they are just willing to look for it.

Author Michael J. Rubel first began telling Charlie Chipmunk stories to his children. As the tales expanded and his children grew, they encouraged him to write the stories down so others could enjoy them as well. Michael himself grew up on a ranch, so writing a story set on a farm has provided him with the opportunity to share the wonders of a farm with a generation of children who may have not had the same wonderful experience.

Today, Michael lives in Newport Coast, California with his wife. Fans of The Adventures of Charlie Chipmunk will also enjoy Michael’s first book, Big Feet: The Story that follows the adventures of Guruto, a young giraffe. For more information, visit his website at: http://booksbyrubel.com.