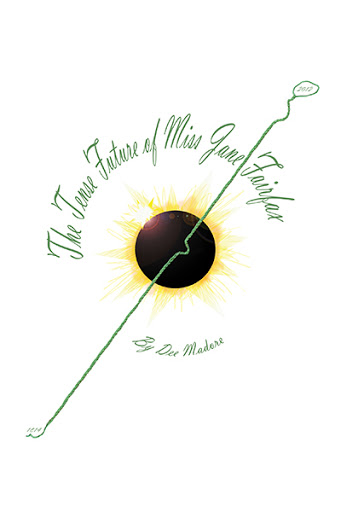 The Tense Future of Miss Jane Fairfax
by Dee Madore

“It is a truth universally acknowledged, that—”

Elariia slammed down her pen in disgust. How many wannabe writers had attempted to equal the deceptively gentle wit of Jane Austen’s memorable opening line to Pride and Prejudice?

Young aspiring author Elariia Bowen dreams of the novel she’ll one day write, inspired, she has no doubt, by her literary heroine Miss Austen. In the ever-supportive company of her cat and “mews” Boots, she wonders if she’ll ever uncover the story she’s meant to write.

Waking one morning in a strange bed, Elariia finds herself an interloper in the mind of one of her most beloved fictional characters—Miss Jane Fairfax of Austen’s Emma! How on earth can this be? And how will Elariia’s twenty-first century mentality affect the way Jane’s story unfolds?

Join Elariia, Jane, Emma, Mr. Knightley and the entire original cast as they relive Austen’s popular plot—unaware that there is a twenty-first century feminist in their midst. This is Emma reimagined for the modern day Austen lover.

Dee Madore grew up enjoying the tales of Austen, Dickens, and other 19th century literary greats, read aloud to her in the many theatrical voices of her mother and father. Little wonder, then, that the stories and their authors have stuck with her all her life, and presented themselves to her, over time, for analysis and critical deconstruction.

During one such encounter with Emma, it occurred to Dee to ponder the fate of the novel’s most mysterious and arguably undervalued character: Jane Fairfax. Upon reflection, Dee decided that Jane made far better heroine material than the gossipy, naïve, and complacent Emma Woodhouse! And so the seed of this novel came into being.

An introvert with a career in education (sprinkled with a little psychology), it was no great stretch for Dee to inhabit the potential young governess’ psyche—and provide her with some more modern female insight, of course.

Dee, a proud mother and grandmother, resides happily in her late parents’ one-hundred-and-one-year-old home with her three delightful cats. She hopes that this story, with its theme of women empowering women at a time when this was virtually impossible, will resonate with her readers.

The Tense Future of Miss Jane Fairfax will be available in the FriesenPress Bookstore soon.