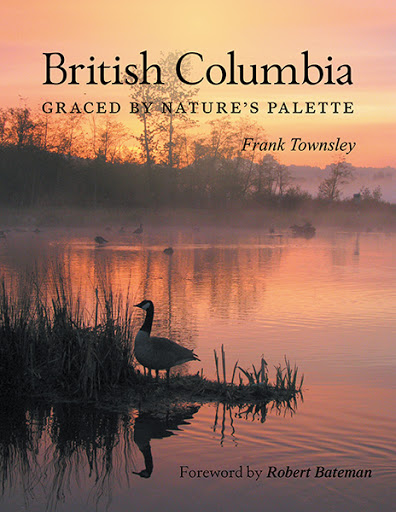 British Columbia is blessed with spectacular beauty and diversity, from its coastal shores and temperate rainforests to the Rocky Mountains, from its southern deserts to the northern sub-Arctic tundra.

This book will take you on a wondrous and extensive journey through British Columbia in all its seasons, divulging not only its varied landscapes, but displaying some of the abundantly rich nuances of plant and animal life, many existing nowhere else in Canada. The book will showcase rarely seen wildflowers, berries ready for the picking, as well as mushrooms, lichens, mosses, and ferns all fighting for light on the forest floors. It will unveil unique wildlife behaviour, colourfully painted insects, pesky rodents, stunning birdlife (and their lovably whimsical offspring), and a profusion of majestic land and marine mammals.

Images of Vancouver and Victoria, as well as abandoned relics from the past returning to nature all complement British Columbia’s natural beauty, becoming essential to the inherent mosaic that defines this province.

With its varied and wondrous landscapes, graced by its diversity of flora and fauna, British Columbia is arguably one of the most unique gems of this planet, all the while shouting out for its preservation.

Frank is an avid naturalist and traveler who loves capturing nature’s treasures in both his photography and painting. Immersing himself in the great outdoors has almost been a passion since his childhood. His parents had been instrumental in his appreciation for nature through family camping and sailing. This was no more exemplified than sailing to Hawaii in 1970 on his parent’s 32 foot sailboat (his university graduation present).

Born in Vancouver in 1948, he was basically raised in North Vancouver in the shadows of the North Shore Mountains. He received a Bachelor of Science degree from the University of British Columbia, and later graduated with honours in 1979 from the Art Center, College of Design in Pasadena, California, where he studied watercolour painting under Paul Souza. He then returned to Vancouver and established a freelance practice in both photography and painting. He joined the Federation of Canadian Artists in 1979 and at his first exhibition in the spring of 1980 he was awarded the first place Shell Canada award. Shortly thereafter he was approached by Canadian Gallery Prints and had dozens of watercolour images printed and distributed across Canada. Some of his photography images have graced the covers of several publications, and the cover image of this book was chosen by the Pacific Parklands Foundation, printed on the cover of tens of thousands of flyers. He teaches both photography and painting throughout the lower mainland. This is Frank’s first book, hinting at a possibility of another in the future.

British Columbia will be available in the FriesenPress Bookstore soon.