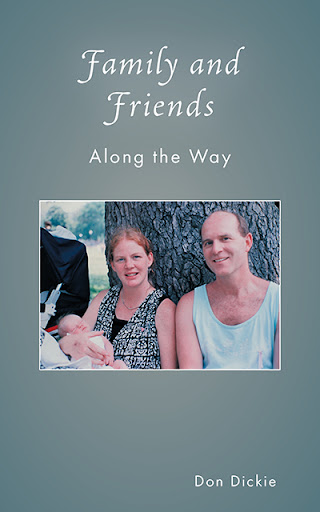 Family and Friends Along the Way
by Don Dickie

This is my story. About a gay guy born and raised in suburban Toronto. It is about being different and about the struggle to discover and recognize my gayness in a society that shunned and targeted gay youth and men. But it is not just about struggle and pain. It is also about the good things in life that help to create a family full of fun, love and companionship.

Throughout my almost seventy years of life, I have worn many different faces: corporate executive, husband, father, brother, martial artist, Buddhist, artist and poet. I met an extraordinary lesbian and together we formed a family with a young son more than 30 years ago, long before gay families made the headlines. I found the love of life and have celebrated more than 25 years of married life together. And I experienced the losses and grief that everyone experiences as loved ones pass and illness raises its head.

My story is my own and it is different. And it holds much of what is the same for everyone else.

Don Dickie was born in 1952 and knew he was different at the age of eleven. In 1980 he came out to his family and friends. At the same time he began practicing Aikido. He has been the Chief Instructor of the Ottawa Aikikai since 1990 and holds the rank of 6th Dan in Aikido and 3rd Dan in Tae Kwon Do. He follows a daily meditation practice as a practicing Buddhist. Professionally, he holds a PhD in statistics and measurement, an MSc and BSc in Kinesiology, and a BSc in Cognitive Psychology. His kinesiology and psychology backgrounds have influenced how he teaches Aikido. His first book, Data Analysis and Sampling Simplified, A Practical Guidance for Internal Auditors, was published by the Institute of Internal Auditors Foundation in August 2019. The following year he published his first book of poetry about Aikido, Silent Winds of Aikido that summarizes much of his personal teachings. In 2022 his second book of poetry, Reflections on Aikido, Life’s Everyday Lessons, reminds us that Aikido is more than physical technique that applauds athleticism and crowd appeal. There is a dimension of personal and societal development hidden in the founder’s lectures and dokas. Both books are suitable for anyone who wrestles with the balance between technique and awareness. Don lives in Ottawa, Canada. Every morning during his meditation, he looks out upon a small backyard in a quiet suburb. He shares his life with a wonderful husband, shaman, and tantrika, Roger.