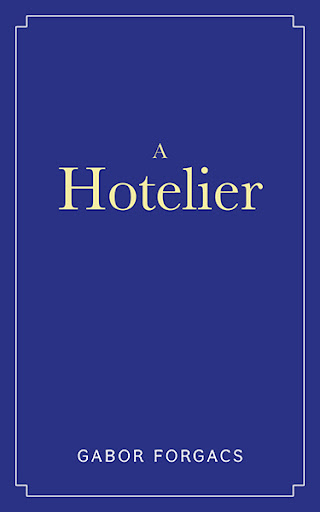 A Hotelier
by Gabor Forgacs

If you ever stayed or worked at a hotel, this book will take you to familiar places. The journey of an international hotelier is told through several stories, offering a peek behind the scenes. It also paints a picture of life in socialist Hungary in the decades before the collapse of the East-European communist regimes. How did the Archbishop of Canterbury get into the back seat of a beat-up old Lada for a ride on narrow country roads to visit the Abbey of Tihany, Hungary? What was a most genuine solution improvised by the night manager, when the highest ranked executives of the largest Canadian bank held a private year-end party at a suite of a Toronto hotel and ran out of beer past the last call? How did a return guest get walked on an oversold night to another hotel after the hotel ran out of rooms? How was sleeping on a couch sold for a night in the elevator lobby of a hotel? What happened when a special cake of a corporate convention was dropped and ruined by accident in the middle of the night? These stories and others take readers on a trip across continents and into the life of a professional hotelier who spent decades in hotel operations. The author also describes life in the seventies and eighties in Budapest, Hungary. Entertaining insights by a good storyteller offer a real treat for the reader.

Gabor Forgacs grew up in Budapest, Hungary. He worked as a bellboy, a waiter and as a front desk concierge before he gradually became a hotelier there during the 1970s. That was a lucrative career at the time. He worked his way up to the top and became the General Manager of a three-star full service hotel in Budapest. He was 38 and already an accomplished hotelier when he immigrated with his wife and two small children to Toronto, Ontario, Canada. There he worked at The Inn on the Park, a Four Seasons hotel for nearly two years before he switched to academia and became an associate professor at Ryerson University. He taught hospitality management courses, presented at international conferences and published papers in international journals. Gabor is also a textbook author: his book "Revenue Management. Maximizing Revenue in Hospitality Operations" published by the American Hotel and Lodging Educational Institute is used by educators and practitioners in dozens of countries all over the world. In his memoire he shares with the readers the most memorable stories from his time at hotel operations. He also provides readers with an entertaining insight into the world of hotels.