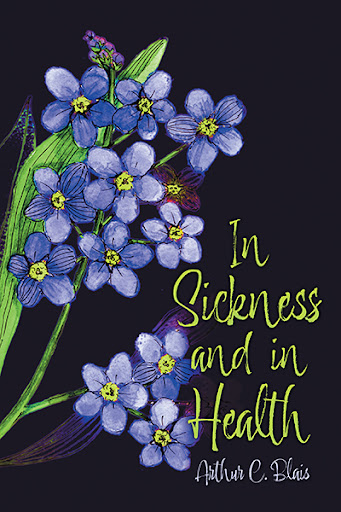 In Sickness and in Health
by Arthur C. Blais

Did you ever think of going on a vacation with no idea of where you were going or how long you’d be away—not preparing, not packing, not bringing anything with you? Then, while you’re on this vacation, you don’t know where you are, you’re not sure how you got there, you can’t find a path to follow, and the route ahead is pure fog. You have no idea of where you’re headed, and all you know is that you need to take one step after another just to keep on going.

In Sickness and in Health documents such a journey, the author’s personal journey, taken from his wife’s Alzheimer’s diagnosis until her death. As the disease progressed, the realities of daily life changed as Alzheimer’s stole his wife’s ability to function, her ability to communicate, her personality, and much more. But, while much of the focus is on Beth’s deteriorating condition, this memoir also offers insight into the toll that Alzheimer’s and, by extension, any terminal illness, takes on caregivers and survivors. The emotional roller coaster can be dramatic and can persist well past the death of the patient. But readers are also offered some practical advice about housekeeping items—finances, legal affairs, and considerations around care—each of which must be thought through for both the short and long term.

Written from the heart, In Sickness and in Health offers solace to those who have lost someone to Alzheimer’s or other terminal illnesses and assures them that they can get through this most painful time in their lives. It offers a glimpse into a world that we all too often go out of our way to avoid—and some suggestion for navigating it with a little less bewilderment when we can evade it no longer.

Arthur C. Blais spent ten years in the Canadian Armed Forces before becoming a Computer Technologist for Telus Communications. There, he met his wife, Beth, to whom he was happily married for many years. During the last seven years of her life, after a devastating diagnosis of Alzheimer’s disease, Arthur was her willing primary caregiver. Prompted by compassion for those who have to face the bewilderment, lack of information, and pain that plague those touched by Alzheimer’s, his desire is to provide a glimmer of hope, some practical information, and some insight into what your journey might look like.