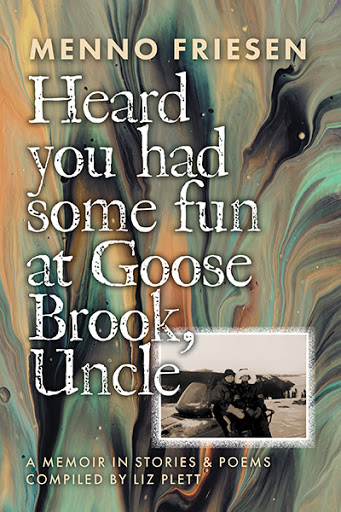 Heard You Had Some Fun at Goose Brook, Uncle
A Memoir in Stories & Poems
by Menno Friesen

In these suspenseful stories and picturesque poems, readers witness highly entertaining, vivid, often hilarious images with backdrops of deep emotional and spiritual self-awareness. Heard You Had Some Fun at Goose Brook, Uncle includes an account of a disastrous snowmobile ride across two lakes in Labrador during spring melt, an escapade that was meant to take a break from small town life. The story is only one example of the writer’s exceptional skill in joining opposite extremes from very disparate worlds.

These vulnerable narratives help us all toward an understanding of ourselves and how we attempt in various ways to escape reality, pursue freedom, seek salvation, and strive for independence in an interdependent world. Readers will be inspired and challenged to honesty and consciousness of their own responses to both everyday and extraordinary encounters with the wider world and their inner selves.

This delightful, insightful and thought-provoking memoir reflects the passions and priorities of Menno Friesen’s life: relationships with friends and family, relationships at work, travelling to experience a variety of cultures, being in nature and writing.

Menno’s experience of growing up in an urban, conservative, Manitoba Mennonite setting, and then moving beyond Mennonite circles, shaped much of his writing. His parents both emigrated as refugee children, his dad in 1924 and his mom in 1947, from Mennonite colonies in Russia to Canada.

On Menno’s grade school writing assignments, his English teacher wrote comments such as “an extremely successful line,” and “the writer has a feeling of eavesdropping at a distance.”

Menno went on to study creative writing at the University of Winnipeg while making his living with driving a school bus for Winnipeg School Division. Between morning and afternoon runs, he often settled on the living room couch with his laptop to write.

His Creative Writing professor recorded that Menno is “an unusually talented writer....[using] elements that we rarely see: a sense of style, of rhythm, grace combined with astute observation, absolute honesty and humane compassion. He is tough-minded, exacting of himself and has a wonderful sense of humour. He takes an interest in the world.”

With Liz Plett, his life partner of 28 years, Menno travelled to Costa Rica, Europe, Egypt, Cuba, and many Canadian destinations—trips that always inspired more writing. At the time of his sudden passing due to meningitis in March 2019, Menno and Liz were planning a Spring Break trip to Valencia, Spain.