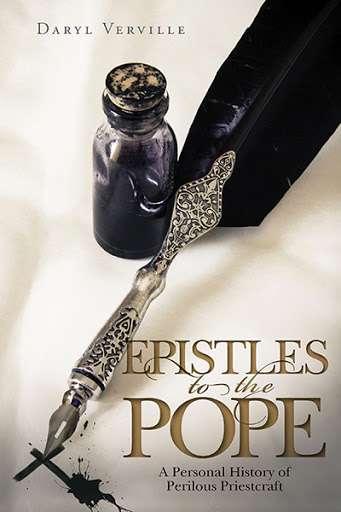 In this poignant memoir, Daryl Verville gives an honest and harrowing victim-impact statement told through powerful letters to the Pope. His father was sexually and physically abused for years in the residential school system implemented by the Roman Catholic Church and the Canadian Government. His father became a violently abusive patriarch and Verville paints a vivid picture of the impact of his father’s deeply imprinted trauma on his family. He explores the Vatican's complicity in the diverse crimes of physical, emotional and sexual abuse committed by the clergy, the corruption in these scandals and the generational consequences of the abuse. Epistle to the Pope provides a unique and intimate perspective, telling the inspiring story of Verville’s early spiritual ascent followed by a dramatic moral decline culminating in two drug overdoses and near-death experiences, how he re-emerged from the hell, and how he ultimately achieved profound redemption.

"Epistle to the Pope is the memoir of a seeker, a classical pianist, and a sometimes drug dealer and addict. Author Daryl Verville is also an intergenerational descendant of a survivor of residential school … I found it to be a page turner. Daryl’s life moves at a breakneck speed, which is why I couldn’t put his memoir down. The author travels through life … barely coming up for air. But when he does, it’s always a surprise, sometimes a shock. What’s next, I asked myself, as I read on late into the night."

"This work is a successful demonstration of the … legacy of residential school abuse on future generations. Mr. Verville’s ultimate message is not bitterness or sorrow, but of perseverance and hope … This work is courageous."

Daryl Verville is a classical concert pianist, documentary filmmaker, writer, multi-media theatre artist and producer. He studied Jungian Psychology for thirty-three years and has an extensive background in comparative religious studies. He has an abiding passion for bio-dynamic gardening and the Eco-Village movement. He loves to play soccer and is a FIFA referee. He lives in Nelson, British Columbia, with his two boys, two roommates, two cats, and a grand piano.