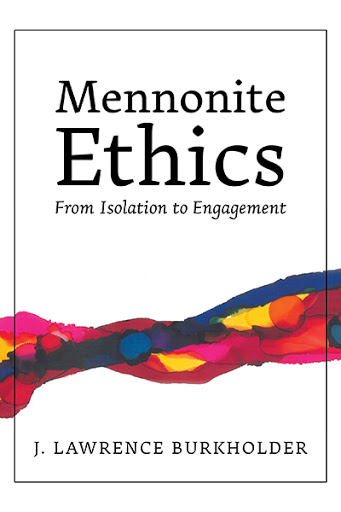 Mennonite Ethics
From Isolation to Engagement
by J. Lawrence Burkholder

J. Lawrence Burkholder was a sectarian realist who advocated nonviolent activism in order to engage the faith community with the power structures that guide society and politics. He encouraged the Mennonite church to move beyond its tradition of withdrawal and separatism in order to renew its moribund spirit. Burkholder assumed that people of faith, and especially Mennonites, should impact social and political structures through nonviolent action, and thereby make those systems more just and peaceful. Any withdrawal of that responsibility was, according to his thinking, a denial of the gospel itself. Efforts to hold onto the principle of a withdrawn or separate community were, for Lawrence, a delusion the Mennonite church could no longer afford. In his final essay he observed, “It is not enough for churches to be committed to love and justice while ignoring power.” “The Anabaptist mind is one of paradox. On the one hand, the Anabaptist expressed joy and victory in this world claiming that the possibilities of life are virtually unlimited. Anabaptists were not conscious, as was Luther, of the legacy of original sin which placed a limit to human attainment. They claimed that Jesus came to bring life here and now, which means inexpressible joy and satisfaction. On the other hand, Anabaptists took a sober attitude toward life and at times this developed into a near morbidity.”

The third way stands in contrast with major protestant emphasis on preaching and the centrality of the Mass in corpus christianum. The third way, by way of contrast, focuses on the process of living, ethical living , of the gospel in the midst of a community that is engaged with the world around it. This focus on ethics centers on relationships where trust, reconciliation, forgiveness and conflict resolution are the central dimensions of the community. In this manner the third way is not a critique or rejection of other traditions but an alternative for being the body of Christ by means of ethical living.”

“Is it possible to create the conditions of true community in which the true nature of human life can be fostered in a world characterized by materialism, industrial power, technics, urban culture, mass communication, impersonality and bureaucracy? Therefore it follows that the Christian must some- how be interested in and assume responsibility for the world.”

J. Lawrence Burkholder (1917-2010) was the Thomas S. Victor Professor of Theology at Harvard Divinity School before becoming President of Goshen College. His memoir, Reflections of a Sectar-ian Realist, was published in 2016 by the Institute of Mennonite Studies. His early career experiences included relief work in China, serving as a Mennonite pastor and Associate Professor of Theology at Goshen Biblical Seminary. Burkholder received his B.A. degree from Goshen College, a Bachelor of Divinity from Gettysburg Theological Seminary, a Master of Arts and a Doctor of Theology (summa cum laude) from Princeton Theological Seminary. His memoir, Reflections of a Sectarian Realist was published recently by the Institute of Mennonite Studies and edited by Myrna Burkholder. Lawrence was married to Harriet Lapp and they had four children: Myrna, Howard, Janet and Gerald. Janet’s husband, Lauren Friesen, is the editor of this series.