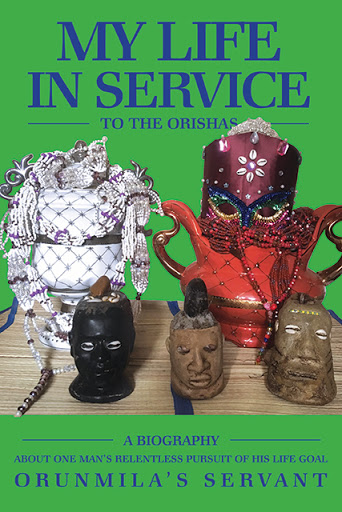 Italian-American Orunmila’s Servant escapes a troubled, at-risk boyhood by joining the United States Marines. After years in the military and a number of deployments, he comes to feel as if his life has never been his own. But one very early morning in 2011, as he’s casually smoking a cigarette while driving to work, everything changes. Alone in his car, Orunmila’s Servant hears a crystal-clear voice, and it says, “It’s time…time to practice Santeria.” From that moment on, a whole new world opens up for him, as he pitches himself into a fervent quest to learn all the secrets of the Orishas and create a happy, meaningful life for himself. In a passionate, yet frequently hilarious companion piece to his first book, Orunmila’s Words Don't Touch the Floor IFA Odu Synthesis, Orunmila’s Servant chronicles his adventurous rise to joy and enlightenment in service to the Orishas, while compassionately lighting the way for others to follow.

This book was written as a testimony to all those who find this work to know the power and realness of the Orishas in Afro Cuban Santeria. This is my biography as it pertained to my life as how it all happened word for word directly from my own account and life experiences.

Orunmila’s Servant grew up in New York City and Long Island. He spent more than a decade in the U.S. Marine Corps, where among other deployments he served in Iraq and Korea. It has been six years since Orunmila’s Servant began his three and a half year quest to go from non-initiate to Babalawo. Now he lives joyfully with his Orishas in Kent, Washington, a beautiful place with rivers, valleys and streams. He hopes this book will help to spread the divine power of IFA.

My Life In Service To The Orishas will be available in the FriesenPress Bookstore soon.