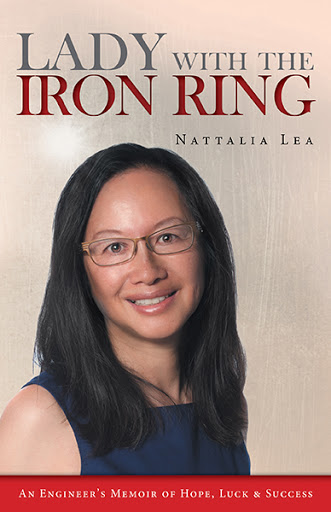 Lady with the Iron Ring
An Engineer’s Memoir of Hope, Luck and Success
by Nattalia Lea

In 1978, Nattalia Lea became the first woman to graduate from the University of British Columbia with a bio-resources engineering degree – an era when less than 0.5% of Canadian professional engineers were female. Then 26 years later, in 2004, after four engineering job terminations and a 16-year journalism stint, this working-class woman makes a comeback into Alberta’s oil patch boardrooms. Lady with the Iron Ring is the heartwarming, witty and tell-all memoir of a woman with a mission who didn’t recognize it as one at the time.

A hilarious must read about persistence and adventure.

Painfully honest at times, this is a pragmatic and humorous retrospective of one woman’s 40-year journey to succeed then and now…as an engineer in Alberta’s oil patch…

A most readable account of what it was like to be a working woman in the Alberta oil patch, which once was white male dominated.

For men and women looking for exemplary guidance in coping with the daily turmoil when succeeding in a business or professional career…reflects her multi-career perspectives and growing up in Canada as a “banana.”

Nattalia Lea, P.Eng., worked in leadership roles at major engineering and oil companies. An internationally published writer, award-winning screenwriter and filmmaker, she wrote for numerous publications, including The Globe and Mail, Calgary Herald and Oilweek.

Nattalia Lea, P. Eng., an internationally published writer, award-winning screenwriter and filmmaker, has embraced two diabolically opposed worlds. Her engineering career chronicles the rise and fall of oil prices over the past four decades, working her way up major engineering and oil companies into leadership roles, at Bantrel and Husky Energy. The 1986 oil crisis fueled her second writing career.

Her articles have appeared in newspapers and magazines world-wide, including “The Globe and Mail”, “Profit”, “Oilweek”, “Vancouver Sun”, and “The Calgary Herald”, and textbook “Health Issues”. Lea lives in Calgary and has two grown children.

Lady with the Iron Ring will be available in the FriesenPress Bookstore soon.