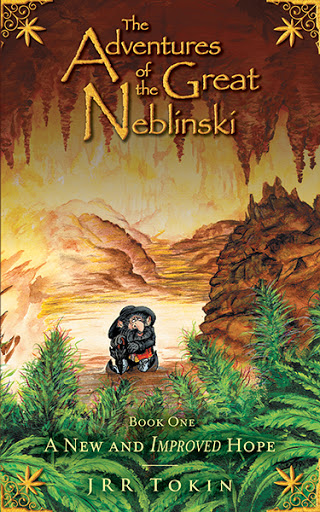 A tiny pot smoking subterranean G'nome [guh-nome] (cousins to Gnomes) is taken away from his homeland deep inside of the world by his people's long lost creator and deity, and placed on the surface-world among giants and monsters. There he undertakes a perilous and HILARIOUS journey to rediscover the origins of his people and uncover the secrets of their unique and ancient culture.

Along the way he befriends a joke telling sasquatch, a legendary monster/warlord, a dinosaur-riding lizard-man, a spliff-smoking ratman and a strange teenage monster with the heart of a hero.

Together they must face an evil that they could never have imagined. Follow this band of hilarious misfits as they take you on an epic journey of high adventure filled with suspense and danger in a world of dragons, sorcerers, and plenty of "SACRED HERB".

JRR was born in 1964 and grew up in a single parent home aboard the international space station orbiting the Moon. Early in life, his mentors recognized something in him that inspired them to push him to aspire to ever higher limits.

At age 15, after receiving his first two master's degrees, in quantum physics and medicine, he climbed Mount Everest and was responsible for rescuing 34 stranded Sherpa guides and their clients from seven yetis and a host of saber-toothed snow leopards. With only a stick of gum, a pickle, and a paper clip he managed to create a complex series of challenges for the enemy which distracted the monsters while the Sherpa guides fled in JRR's self-designed and self-constructed arctic exploration vehicle (which he assembled on site). After defeating the enemies he descended the mountain using the skins of the Yetis as a hang glider and became the first man to ever pee into a shot-glass from 2000 feet while breaking the sound barrier. (It is unknown if a woman had previously attained this prestigious title).

At age 20 JRR sailed across the Pacific Ocean on a raft made from handcrafted egg cartons, used sneakers, a tube of super glue, and seventy thousand tonnes of pressed flowers. On this perilous journey, he faced a school of thirty megalodons and fourteen giant prehistoric squids, slaying them all with his swiss army knife and rugged good looks, thus ridding the world of their species forever and saving future egg-carton sailors from certain doom. He was presented with the international "Legendary Nautical Creature Slayer" award by the union of international Marine Guys. It was also on this same trip that he discovered (without question) the truth that the world was indeed a sphere when he ended his Pacific crossing by landing in Halifax harbor, on Canada's east coast. After delivering the Titanic survivors he had rescued along the way, and confirming his astronomical findings to the authorities he was joined by legendary musicians/composers Frank Zappa and Jimmy Hendrix. Both of whom were so humbled by his greatness that they offered to teach him to play guitar if he signed their pizza boxes. He declined, saying: "Guys, you already did teach me everything you know" and signed their boxes anyway. He then went on to form a band with the aforementioned musical geniuses, winning that year's Grammy Award for Best New Album in all styles and kick-starting Frank and Jimmy's careers. He did so under several assumed names, of course.

When he was 27 JRR decided to visit England where he spent his days tutoring the physically disabled, curing polio, running an international endangered animal rescue center, and inventing Break Dancing. His favorite student, Steven Hawkins, (who at first wanted to dance) would later be praised among his peers in physics for his almost legendary ability to remain completely still for hours at a time. He was able to achieve this through JRR's teaching in the art of self-defense known as Tai Huan Ahn. It was also there in England where he invented the dog breed known as the Corgi, base jumped from the Big Ben clock tower, discovered and colonized France, and acted as the MC for the grand opening of the massive tunnel under the English channel (which he also designed). The queen of England herself awarded him with "The Royal Decree of All-Time Greatness" and purchased more than seven hundred corgis from his rescue center. She also made him heir to the throne and said he was officially the sexiest man on earth. (a title he maintains to this day)

He declined the British Throne and instead asked for Canada's independence (which he was granted - making the colony of Canada free and turning it into a democracy at last). On top of that, he was also given ownership of Scotland which he soon gave back to the Scottish people and in turn was awarded a position of lifetime nobility, making him their king for all time and leading to his starring role as William Wallace in the mega motion picture "Brave Heart". So impressed were the Danes and Icelanders that they too voted him in as their King for life, and soon after that nineteen other countries around the world followed suit. Such was and still is his greatness.

All of these honors he politely declined, stating that he simply didn't have the time to invent the internet discover the cure for The Black Plague, teach Gordon Ramsay to cook, develop a propulsion system for interstellar exploration, win the Olympic gold medal in the triathlon, and be everyone's king all at once. After teaching these countries the art of democracy and trusting they would be okay without him, he awarded them their independence and went on to earn a Masters degree in Greatness from the University of All-Time Awesomeness.

However, all of this was not enough to quell his passion for adventure and a need to challenge his greatness. At age 30 he married the princesses of Turkmenistan and fathered three hundred and eleven children all of whose names he remembers and is able to list in the form of an operatic version of "Atomic Dog" by George Clinton - to whom he taught the art of "Funk".

Alas, this too would not be enough for him to fill his life. When his last child was grown up and on her own being the President of Wakanda, he retreated from society, secluding himself in a cave on top of Mount Fuji for seventy seven years where he astral-projected nightly into another cave on top mount Kilimanjaro on Canada's south coast near a minor province known affectionately as America. It was there on those very same cave walls where he wrote his tomes of power known as "The Adventures of the Great Neblinski" (Still being studied to this day by the most intelligent minds on the planet). It is said that he remains there, in those caves, protected by a thousand ninja warriors and the Royal Canadian Mounted Police commanded by Joe Pesci, writing impossible stories that challenge the limits of human achievement. It is also said that one day he will return to his chosen homeland of Liechtenstein on the yet undiscovered continent of Australia, where he will invent water, discover a new type of food, solve the energy crisis, and make first-contact with interdimensional intelligent societies with his best friends and trusted advisors (and founders of the JRR Tokin fan club) Barak Obama, Peter Jackson, Mike Wazowski and Geddy Lee.