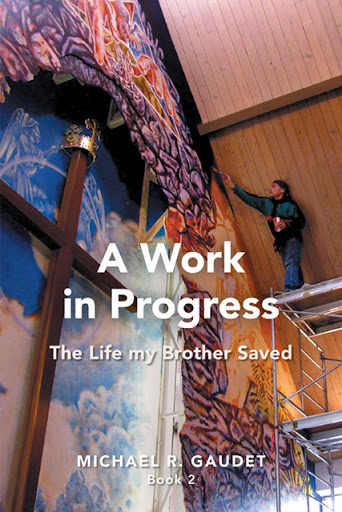 A Work in Progress
The Life my Brother Saved
by Michael R. Gaudet

Following the success of his first book, Dancing with Rejection: A Beginner’s Guide to Immortality, the Canadian artist, author, and kidney health advocate Michael R. Gaudet brings us the second part to his captivating trilogy of memoirs. A Work in Progress: The Life My Brother Saved picks up where book one left off, chronicling Gaudet’s arrival in Saskatchewan with his soon-to-be first wife. Still reeling from his near-death experience as the result of kidney failure, the loss of his father, and the launch of his ambitious career, Gaudet finds himself diving into new projects and experiences on the prairies. His daughter Pearl arrives to the world, born with a congenital kidney condition that puts great strain on Gaudet and his already-troubled relationship with his wife.While navigating the struggles of his daughter’s illness as well as his own, Gaudet continues his personal journey towards healing and success. His spiritual experiences include a life-affirming vision quest alongside his dear friend, a First Nations Medicine Man, as well as the creation of a magnificent mural in a church that brings him closer to God. Enduring various phases of love and loss, Gaudet eventually discovers his soul mate with whom he traverses the vast provinces of Canada.In this fascinating life story, Gaudet offers us glimpses into his bohemian lifestyle and rise to fame as a distinguished Canadian artist. Writing in the style of magical realism, he seamlessly weaves mysticism into his prose. He also speaks with fearless realism of what it means to live with kidney disease, bringing awareness and attention to this insidious condition. As a survivor and an artist, his narrative voice pushes through hardship to bear a wider message about living a fulfilling life and pursuing one’s dreams.

I finished your book and I absolutely loved it. It was thoughtful and inspiring, and all around an excellent read. I've just recommended it to my friends. Wonderful work - you deserve to be very proud of it. I hope it gets the attention it deserves.

Michael R. Gaudet is a renowned Canadian artist known for his monumental murals and activism in promoting knowledge about kidney health and disease. He is the survivor of a near-death experience and kidney transplant that occurred in 1979, when he was only nineteen. He began his artistic career that same year, painting a seminal mural that led him to his life’s calling. Since then, he has painted vibrant, large-scale murals across Canada in both public and sacred spaces. He also works in the challenging genre of high-fidelity portraiture, seeking to immortalize the precise likeness and essence of a person on canvas. In 2001, he was awarded the “People’s Choice Award” for best public artwork by Planet S Magazine in Saskatoon. His first book, Dancing with Rejection, was published in 2015 to great acclaim. A Work in Progress is the second installment in his trilogy of memoirs, with book three forthcoming. Gaudet currently lives with his wife Sharon at the Resort Village of Manitou Beach in Central Saskatchewan, where they operate their seasonal business, “Gibson & Gaudet Gallery & Gifts.”

A Work in Progress will be available in the FriesenPress Bookstore soon.