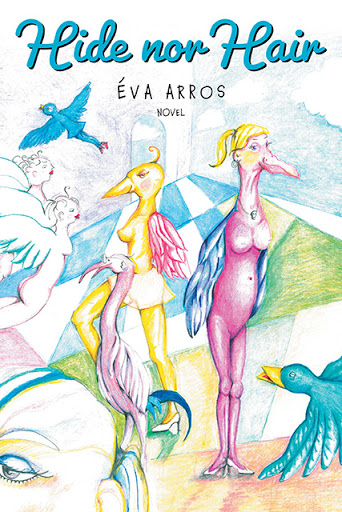 Hide nor Hair
by Éva Arros

For seven years, Claire thought she was living the perfect life with the perfect partner. Julie was everything she thought she wanted, and together on a tiny island in the Salish Sea the two lived as one, laughing together, making love every day, and nurturing the land around them. But when Julie disappears unexpectedly, slipping away one night without warning or explanation, Claire’s whole world is turned upside down.

Needing to find a new path, a new life for herself, Claire knows she can never move on until she finds Julie and discovers where the two of them stand. Her journey of discovery takes her back to Montreal, their hometown, in the hopes of reuniting with her greatest love, or at the very least, finding some sense of closure.

Along the way, there will be new discoveries and experiences, even new loves. But will she reunite with Julie, or get to say goodbye before time runs out?

A Hungarian refugee who grew up in Montréal, Éva Arros has a lot in common with her characters, having lived off grid on a mountain and in voluntary simplicity on a remote island, dealt with money concerns in an urban setting, and fallen in love with the wrong people (though that was long ago).

In the nineties, she was one of twelve winners of a contest organized by Radio-Canada, entitled “Des Nouvelles sous le Soleil,” all of whom had their stories published in a book and read by professional actors on air. Though this is her first published novel, she has always been interested in writing and the arts, and has performed in several one-woman shows that she wrote (as well as taking on many other roles) in Fringe Festivals across Canada.

Éva currently lives in Victoria, BC, and lives full-time with Debbie, her loving partner of twenty years. Although she loves cats and Debbie loves dogs, the two have no pets at present, as they love to travel (and very much look forward to getting back to it once the Covid-19 pandemic is under control). She has three grown children, and three grandchildren.

Hide nor Hair is the first book in the series titled Still Life with Claire.