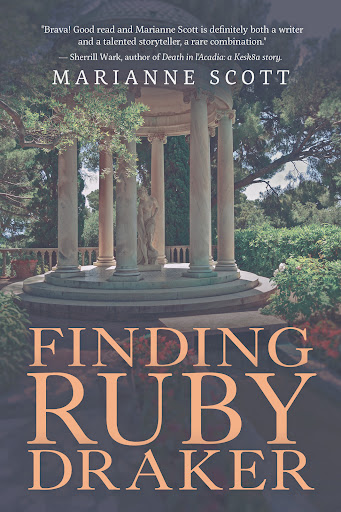 Kathleen Jones has lived a protected and typical suburban life, nothing unexpected in her carefully controlled and planned existence. She’s about to complete her college degree and is ready to start a successful career but after completing her last exam she comes home to find her world has been turned upside down. Her home has been torched and her parents and little brother killed. If that’s not bad enough, she is kidnapped and drugged unconscious by strangers posing as police officers. When she awakes she discovers that everything has changed – her face, her name, and everything she believed to be true. But things get worse. Hardly recovered from surgery, she is whisked away under the cover of darkness as more men storm the clinic with guns. It seems that the men who abducted her are not her greatest threat. Now on a private charter on its way to Nice, France, her abductors are calling her Ruby – Ruby Draker!

Brava! Good read and Marianne Scott is definitely both a writer and good storyteller, a rare combination.

Sherrill Wark, author of Death in l'Acadia a Kesk8a story.

In all the years Marianne Scott worked in

business, she never knew she had a flair for

storytelling. Being tangled in the day-to-day

time or energy for creativity. Yet at her core, she

always felt something there. She didn’t know

how to name it, this yearning, that grew inside

her with every passing year.

Once she left the corporate world, instead of penning non-fiction tales, she gave herself over to her imagined worlds. Her truest pleasure, amusement, and release soon came from turning the ordinary into the extraordinary. From this, Finding Ruby Draker was born.