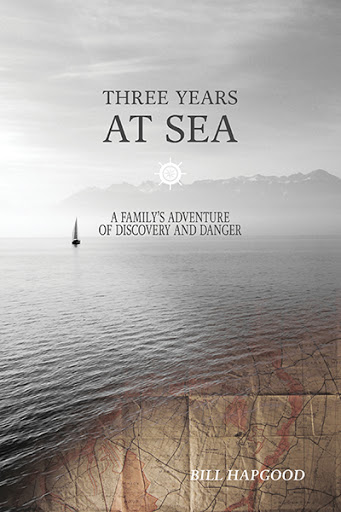 Follow a true story of a family’s adventure as they embark on a three-year sea voyage on their twenty-nine foot sailing boat. Reliant on a sextant and compass, Bill Hapgood, his wife and their two daughters navigated approximately 26,000 nautical miles before making their return to Canada. While some questioned their judgement to embark upon a dangerous journey, they remained undeterred in their quest to explore wondrous locations and experience great adventure.

With a sense of exploration in front of them, they were not prepared for the challenges that lay ahead—at sea and on land—not least unpredictable weather, piracy, drug dealers and places that were notorious for violence against anybody perceived to be an outsider.

Despite the dangers they would meet a host of interesting and unusual characters. Families who had also made the sea their home and strangers who would become close friends. Keeping in contact with each other as they journeyed forth, such camaraderie would prove essential throughout their journey. They would discover that these newly found relationships would be a vital ingredient in holding them together in their most desperate times, particularly on occasions when they would question their own rationale.

Three Years at Sea is a tale of courage, discipline and a family’s devotion to succeed as they set out on a three-year sailing trip of 26,000 nautical miles of ocean. An account of a family’s unity, unexpected learning and daring to accomplish their dream—a true adventure of danger and discovery.

Having been diagnosed with hepatitis, Bill Hapgood was faced with the prospect of death, which made him wonder what life’s journey was all about? With a will to survive, his recovery had given him a new zest for life, and one that would take him and his young family on an amazing voyage, covering 26,000 nautical miles of ocean.

Born in Quebec, Bill’s sea adventures began with a three-month sailing excursion from Vancouver to Alaska, which was the inspiration to what would become the start of a three-year sailing voyage. Having spent many years racing cars, in 1970 he became a champion in Production Sports Car Racing. However, it was sailing and camping with his family that led him to write this book, memories of Three Years at Sea, which follows the family of four (including two young daughters) on their voyage aboard their twenty-nine foot sailboat, while solely reliant on a sextant and compass for navigation. Throughout their journey Bill kept daily ship logs, which would prove to serve him well in terms of all the research needed to write his book.

Three Years at Sea will be available in the FriesenPress Bookstore soon.