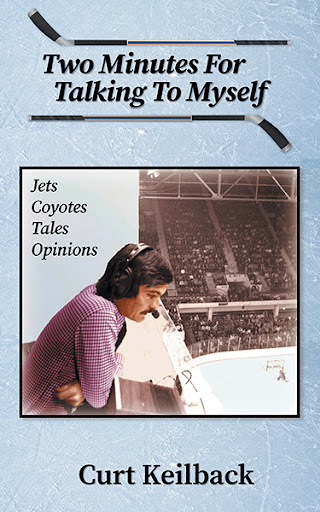 Two Minutes for Talking to Myself
by Curt Keilback

Have you ever wondered what it’s like behind the scenes of the NHL? Are you an avid hockey fan looking for untold stories? 2 Minutes for Talking to Myself shares 200 anecdotes spanning the twenty-seven years NHL broadcaster Curt Keilback traveled with the Winnipeg Jets and Phoenix Coyotes. Keilback has the inside scoop not seen on television or heard on the radio. He’s interviewed coaches, managers, and players thousands of times, and shares his experiences as well as opinions on contemporary broadcasting and hockey issues.

With tales about legendary names like John Ferguson, Dale Hawerchuk, Teemu Selanne, Keith Tkachuk, Wayne Gretzky and many more, this book will entertain hockey and history lovers alike. These stories are self-contained, ready whenever you have a minute to enjoy a humorous and honest snippet of history you’ve probably never heard before.

Curt Keilback is a retired NHL broadcaster. He was there when the Winnipeg Jets joined the NHL. He was around for the birth of the Coyotes franchise in Phoenix, and the rise of many great names in hockey. He was a constant around the league for twenty-seven seasons and called over 2400 games on TV and radio. His voice is synonymous with what was named the greatest goal of the 21st century, Alexander Ovechkin’s 2006 masterpiece: “Just when it looked like it was no longer possible.” You can connect with him via email at curtsbook@mail.com. In his spare time, you can find him on the golf course perfecting his swing. He lives in Winnipeg with his wife Linda of forty-eight years and counting.

Two Minutes for Talking to Myself will be available in the FriesenPress Bookstore soon.