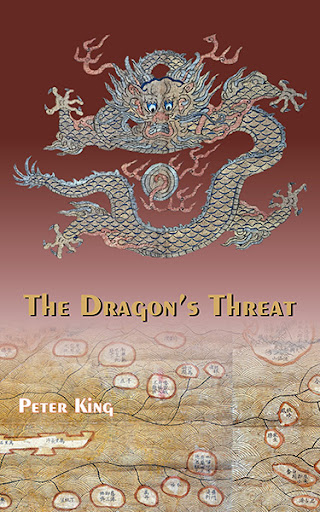 The Dragon's Threat
by Peter King

The dispute centers around Dejection Island, a tiny speck of land in the South China Sea. Britain owns it, China wants it, and the Americans are determined not to let them have it. Peter Holroyd lives a comfortable but lonely academic life, specializing in Ming and Qing Dynasty maritime voyages and cartography and is asked to determine if any sovereignty claims predate the planting of Britain’s flag on the island, which will allow Britain to make a smooth exit. As Holroyd begins his search for evidence, accompanied by a beautiful Chinese assistant, he soon realizes this is no idle academic exercise. The deeper he goes into the past, the more convoluted his present becomes, leading Holroyd to wonder whose future is in greater peril, the residents of Dejection Island or his own.

This novel has a smart, sophisticated, brilliantly crafted plot with lots of moving parts, plenty of intrigue, high stakes, and a mystery at its core that isn’t fully revealed until the end.

Peter King was born in Scotland and grew up in Switzerland and England before coming to Canada to study civil engineering at McGill University. He obtained his MBA at Western University and his doctorate from the University of Phoenix at age seventy. He spent his career as a naval officer, a public servant, a consultant to First Nations, and as a professor at the University of Hearst. For the past fifteen years he been a professor at the Beijing University of Technology. He has competed and coached in fencing, rowing, and cross-country skiing. He was also an international umpire refereeing at the world rowing championships. He has been recognized by federal, provincial, and municipal governments in Canada and by the City of Beijing in China. He has published a history of rowing, several academic papers, and is his first attempt at writing a mystery thriller while writing a second novel and rebuilding a model railway in his basement.