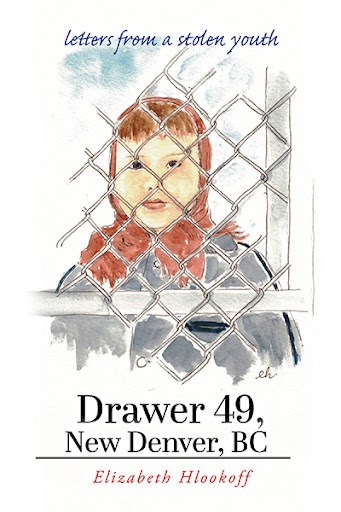 Drawer 49, New Denver, BC
letters from a stolen youth
by Elizabeth Hlookoff

In 1954, at the behest of the British Columbia government, Elizabeth Hlookoff was apprehended by the RCMP for habitual truancy. She had never been to school.

Her parents were members of a sect of Doukhobors called the Sons of Freedom (Freedomites), who refused to send their children to school. The Freedomites, who were pacifists, believed that public schools taught militarism.

The BC government wanted to eradicate this troublesome sect. As with First Nations children, the government believed that apprehending these children and placing them in residential schools would “civilize” them. But the majority of British Columbians don’t know about this. It is their history.

Told from a child’s perspective, Drawer 49 is a series of short stories chronicling Elizabeth’s apprehension, incarceration, and experiences at the New Denver, BC, residential school, where she was confined between the ages of seven and eleven.

Elizabeth Hlookoff emerged relatively unscathed by her residential school experience. Many of the New Denver experiment survivors never resolved the trauma inflicted upon them. The result was alcoholism, broken marriages, inability to love or parent, and ultimately suicide. Successive generations have inherited their burden. In her old age, Elizabeth is beginning to attribute some of her life decisions to her New Denver experience.

She attended UBC for one year, earning a first class average and the offer of a teaching assistant position in the Russian department the following year. The TA salary would have paid for her schooling. She never went back. Although she loved learning, she didn’t know what she wanted to study and didn’t want to be confined to a routine. Perhaps that feeling came from the years of confinement.

Her eclectic work experience includes waitress, cook, salesclerk, warranty administrator, donor relations coordinator for a non-profit, and eventually Executive Director for a private family foundation. Executive Director was a fancy title—there was only the founder, with his money, and Elizabeth. Her job involved organizing and coordinating water and education projects in Kenya. Her heart is full from being able to do these projects.

Elizabeth lives in Maple Ridge, BC, with her husband of more than 50 years. They have three grown sons and an eleven-year-old grandson, all of whom live in the Lower Mainland. Her sons keep her somewhat current and real and always make her laugh.