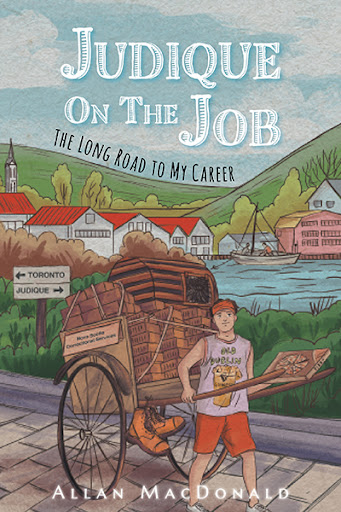 Judique on the Job: The Long Road to My Career is a lighthearted memoir detailing the author’s experiences growing up on Cape Breton Island, travelling, partying, and his never-ending trials and tribulations trying to find a career that would be satisfying on all levels. In his search, the author had about eighty different jobs, many of them unique and interesting. With a friendly and folksy tone, the book takes the reader on a tour of his adventures in employment, including work in correctional services, automobile repossession, student recruitment, and the military. The author also gives us the inside scoop on working as a film extra, rickshaw runner, doorman, and working numerous positions in the hospitality industry. The book will inspire and reassure younger readers struggling to find success and happiness in their work lives. It will also appeal to anyone with a sense of humour and an appreciation for a good story filled with joie de vivre.

The book’s unique title was inspired by a spirited local saying in Judique, Cape Breton Island: “Judique on the floor!” The expression is well known in the area, but its certain origin is not. As Judique was long thought to have the best step dancers in the area, if a Judique native stepped onto the dance floor, people would shout “Judique on the floor!” to alert other dancers they might as well throw in the towel. There is a second part to the story, where apparently Judiquers also liked to fight, so if they were not in the mood to dance, someone would sound the battle cry: “Judique on the floor! Who will dare put us off?” and one or more fisticuffs would ensue. This bit of local colour makes for an apt moniker for this unique and humorous tale.

Allan MacDonald’s own story began in Hamilton, Ontario, where he and his two siblings were born. His parents had moved there from Cape Breton in the late 1950s to find better jobs and to start a family. After eight years in Hamilton, when Allan was five years old, his parents made the decision to return to Cape Breton Island and the family settled in Judique, a small fishing and farming village. Growing up in economically depressed Cape Breton Island in the 1970s and 1980s, Allan knew at an early age that having and keeping a job was front and centre in most families. Like many Cape Bretoners, Allan knew that eventually he would leave Cape Breton Island in search of that all-important career. Fortunately for him, he was raised by two-hard working parents who always managed to have jobs in Inverness County, not exactly a hub for employment opportunities.

In his free time, Allan is an avid reader, and enjoys reading about real life experiences. He hopes that the true events in Judique on the Job: The Long Road to My Career will not only make people laugh, but inspire people who are struggling to find work that makes them happy to take a risk and not be afraid to look at new options.

Allan MacDonald lives in Toronto, Ontario with his wife of twenty-one years, Danielle, their daughter Kendra, son Rowan, and their awesome dog, Walter.