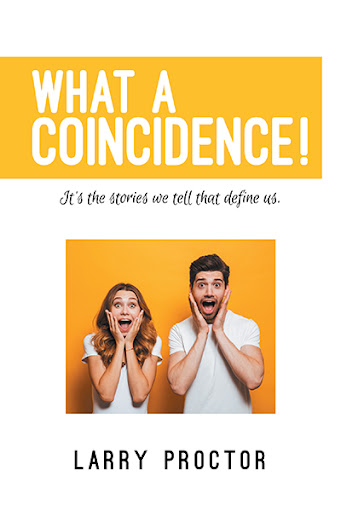 What a Coincidence!
It's The Stories We Tell That Define Us
by Larry Proctor

“What a Coincidence!” is a collection of life stories, some of which are the author’s own and others that were shared with him. Some are coincidences. Others are simple experiences that shaped those who lived them. Some come in the form of letters written and others in the form of letters received. It’s these stories that we all tell each other that define us. People we meet will infer as much about us by the tales we tell, as they do from our appearance, our occupation, or our family.

From a mysterious college roommate to a unique marriage proposal; whether it be one of several out-of-the-ordinary job interviews, or the challenges of child-rearing; there are stories of determination, self-confidence, and sheer luck.

You may shake your head for different reasons as you read about the aftermath of a traffic accident or the shenanigans of university life.

The stories of “What a Coincidence!” are sure to bring a chuckle or two along the way, but also an appreciation for its heart-warming tone for others.

It encourages everyone to reflect on their own experiences; to discover the connections between their stories, the evolution of their own personality, and their path in life.

Larry Proctor has lived all of his life in Caledon, Ontario. He continues to live there with his wife, Margaret. They have two grown children. His family roots in Caledon go back to his great grandfather and when Larry was an infant, his grandfather named a street after him.

Larry is now retired. His primary employment was initially with McDonnell Douglas Aircraft which later merged with Boeing. The last 11 years prior to retirement, he worked as a Business Manager at Humber College.