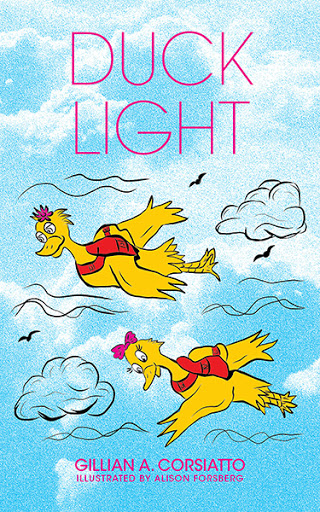 Duck Light
by Gillian A. Corsiatto

What if an animal could resemble a human, sometimes even more than a real human?

Duck Light is the story of Lulu and Rosie: two ducks in love. And, quite frankly, they are bored with life as ducks. The pair are recently engaged and live their lives together in a way similar to what they observe in humans: cooking from a cookbook, watching television, sleeping in a bed, smoking, vaping, drinking, swearing . . . you get the idea. Each chapter is a complete short story, with the stories linked by the pair’s relationship, their impending migration, and their pesky next door neighbours: the scary and mean man on the right, and to the left, Margaret the crazed squirrel.

The book opens with Lulu in the bathtub, savouring a cigarette to the sounds of Offenbach. As the chapters progress, winter is on its way, so all the ducks, including Lulu and Rosie, will have to fly south for the cold season. 'Down South' is their eventual winter destination, and also the setting for the couple’s upcoming nuptials. The book ends with the zany pair being wed in a virtually perfect beach ceremony attended by their migratory pals. It seems as though Lulu and Rosie are basically humans, and not ducks at all! Does their near-human lifestyle exist only in their imaginations, or are they truly as sophisticated as they believe?

Through the two feathered protagonists endowed with human characteristics, such as Lulu’s tendency to be a people-pleaser, and Rosie’s mean streak, this humorous work contemplates a serious question: How can one break free of societal expectations?

Gillian Corsiatto is a lifelong hobbyist writer, frequently recognized for her creative writing abilities, beginning at a young age. Her first job involved books and the written word, as she worked as a library assistant and page in her local library. In order to expand her writing skills and knowledge of literature, Gillian has taken post-secondary English classes, learning from accomplished professors. Outside of writing, music has been an important and constant aspect of her life, including taking piano lessons in early childhood, playing in college-level ensembles, travelling the world with a marching band, and playing solos for an online theatre production company.

Duck Light began with a friend of the author, who had a hobby of creating animals with human behaviours and characteristics. Her drawings would include imaginings like dogs standing on two legs and wearing clothing. At the time, Gillian found these creatures really weird, but almost in a near endearing way. Being no artist, but wanting to be supportive while trying something new, Gillian created a character of her own and called her Lulu. Because drawing is not the author’s forte, she took Lulu the duck and turned her into words on a page. Gillian soon discovered it was actually kind of fun to play around with animal characters in this way. Duck Light is the result.