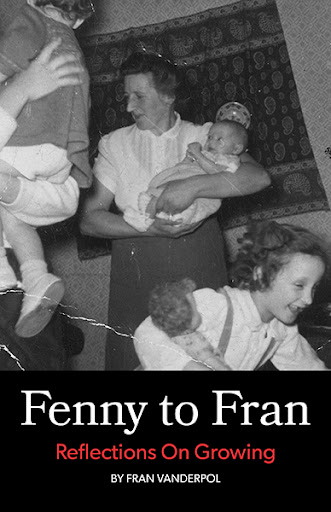 Fenny to Fran
Reflections on Growing
by Fran Vanderpol

I now deeply know that

I am not just Fran -

I am still Fran, but now I see myself as a person, a global citizen whose everyday life has opportunities to be a part of making this world a place of flourishing.

I am still even Fenny, connected to my Opoe and my ancestral roots and extended family on both sides of the ocean.

I am still female, raised in a patriarchal culture, trying to live more fully as an egalitarian while holding my complementarian residue with understanding, respect, and a recognition that while you can learn and embrace new ideas, it takes a while for the body, habits, and emotions to adapt.

I am fully Canadian, and I am actively participating in a diverse, multicultural, multi-ethnic, democratic nation that is, hopefully, beginning to deal with its settler colonial history.

I am still Christian, though my understanding of what that looks like has, as it should, matured considerably.

And I’m still a wife, mother, and grandmother. These labels help define me and give me place and context.

Mostly, I’m an image bearer of God, a vessel through which the love and truth of Jesus can flow freely.

Fran Vanderpol immigrated to Canada as an infant and grew up in southern Ontario. She taught elementary school for 14 yrs. there and then moved to Beautiful BC to marry Pieter, a widower with six children. They added six more children and now have 27 grandchildren and 3 great grandchildren. Yes, family celebrations are very prized!

Together with Pieter she has been involved in the world of business, philanthropy, church and community building.

Fran and Pieter live in Abbotsford, BC, They share a house with one of their daughters, son-in-law, and their young family. All of their twelve children live in Southwestern BC.