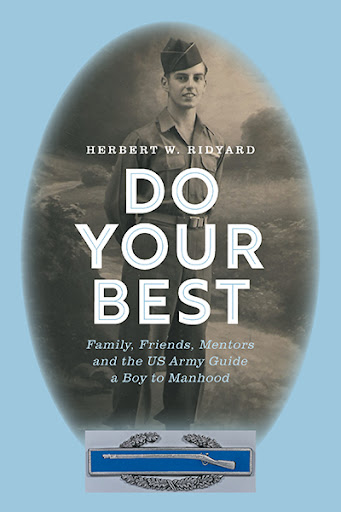 Do Your Best
Family, Friends, Mentors and the US Army Guide a Boy to Manhood
by Herbert W. Ridyard

Do Your Best is the intimate story of a young man, Herbert W. Ridyard, who shares his life lessons—about love, honesty, and dedication—for the benefit of his greater family, friends, historians, and the general populace, but also in memory of those he fought beside and the 430,000 who gave their lives for the US during WWII.

The son of immigrants, his lessons started early with a Depression-era childhood. Although Herb was shy and underweight, his mother encouraged him to always do his best. Taught by his first-grade teacher to pay attention, he discovered he had the ability to remember everything his teachers said, which eventually earned him a top-10-percent berth in high school and college. His stint as a Boy Scout patrol leader taught him that serving others was the ultimate way to be fulfilled. From his gang of boyhood pals, Herb learned about inclusiveness, and his Sunday School teacher taught him about spirituality.

All this prepared nineteen-year-old Herb Ridyard to face the terrors of war. In basic infantry training his body was strengthened for overseas combat as a Private in General Patton's Third Army during WWII in the fall and bitter winter of 1944-45. Herb was able to do his duty to the best of his ability, while having to live outdoors in the constant presence of danger, fear, anger, and hate. These wartime experiences gave him great confidence in himself.

This memoir aims to inspire anyone born with weakness in body and/or spirit to do their best, no matter the circumstances; to understand that a father and mother are the foundation of love, dedication, honesty and morality; to accept guidance from family, friends, teachers, and mentors; to search for their inherent talents and strengths; to never give up; and to find fulfillment by helping others, including one’s country while trusting that the Holy Spirit will be with them always.

A member of the “greatest generation,” Herb Ridyard has lived a long, full life. At age ninety-five, he has a good memory, the fruits of which he shares in Do Your Best. When he was young, looking at airplanes in the sky and building model versions, Herb’s dream was to find a career in aviation. It came true as he earned a master's degree in aeronautical engineering at night school. As an aeronautical research scientist, he worked in the Langley Aeronautical Laboratory's hypersonic wind tunnel for eight years and at GE's missile and re-entry vehicle department for thirty-two years.

Today, Herb lives in a cottage at Masonic Village, a retirement community, in Elizabethtown, Pennsylvania, with his wife of seventy years, Nancy Lou. They are often visited by their four children— Amy Lou and Leslie Ann, both schoolteachers; Herb Jr., a general surgeon; and Rob, a lead software developer—seven grandchildren, and eight great-grandchildren. In his spare time Herb sings tenor in the Sell Chapel Choir and Men’s Chorus, participates in a weekly Bible study, is a member of the Veterans Committee and a Hospice volunteer.