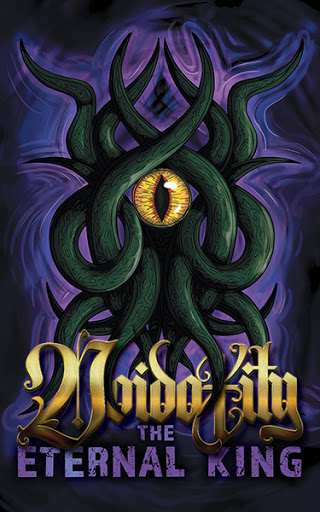 In a world where the roles of Light and Darkness had shifted, there were two powerful individuals chosen by the Old Divines . . . They were given the titles of Ascension and Chaos as recognition of their ferocious might.

A millennia after his wife and son were murdered, Aergos—the Demon King, Lord of Chaos, and ruler of the lost kingdom of Amedus—wakes up alone in the Void Realm, stripped of all memory. With the help of his son’s spirit, he learns of his kingdom’s destruction at the hands of Elysium, the cruel Holy Priestess and daughter of Cydius, the Lord of Ascension and ruler of the rival kingdom of Requiem. Desperate to restore balance in the world and stop Elysium’s ongoing reign of terror, Aergos traverses immaterial planes and finds his way back into the realm of the Gem of Purity, where he was first banished on that fateful day a thousand years ago. There, he discovers his access point to the world he once knew: a magical mirror.

Enter Kisara, a maid to King Cydius, condemned to a life of servitude. After discovering the Gauntlet of Edin, a powerful relic embedded with the Gem of Purity wherein Aergos is trapped, she makes contact with the Demon King. Both seeking freedom from their respective prisons, Kisara and Aergos make a pact to uncover the truth of Amedus’s destruction and the whereabouts of the evil Holy Priestess. Kisara dons the gauntlet, creating a telepathic link with Aergos, and escapes Requiem. Together, the unlikely duo encounter unholy beasts, pitiless villains, and supernatural allies, harnessing the power of Dark magic to uncover and destroy the plague of corrupted Light.

This is Aergos’s last chance for redemption, and blood will stain the earth before peace even has a chance to be restored.

Voidoxity is built upon a clever reversal of the good-evil binary. Although he is known as the Demon King, leader of the faction of Darkness, and on the side of Chaos, Aergos is, in fact, the bringer of peace, order, and good government to the people of the kingdom. In direct opposition is the Holy Priestess Elysium, who wreaks havoc on her subjects despite her alignment with the faction of Light and the side of Ascension. This shifting of traditional symbols results in interesting explorations of assumptions about power, quests, and the roles assigned to good and evil in the world.

The dark fantasy novel Voidoxity: The Eternal King sets up exciting possibilities for future bloody battles and existential challenges in the rich world it establishes."

James L. P. Thompson is a Canadian author and artist. Having had a passion for writing and drawing since childhood, his experiences with ADHD and difficulty in conventional learning environments led him to cultivate these creative skills in the form of short stories and gothic artwork. He derives inspiration from the always-expanding literature, cinema, and lore of the fantasy world. At the end of high school, he decided to put his abilities to the test and write a novel. Voidoxity: The Eternal King—an exciting addition to the dark fantasy subgenre—is his first publication, and the first book in a forthcoming series.