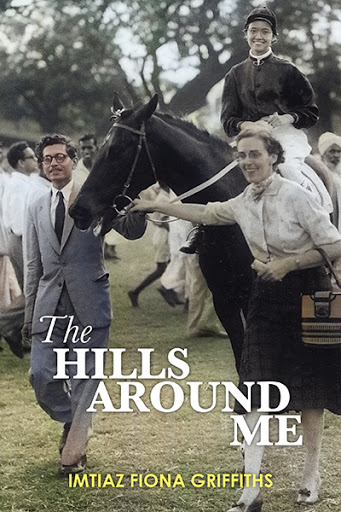 The Hills Around Me
by Imtiaz Fiona Griffiths

A great romance and a life with horses form the lynchpins around which Imtiaz Fiona Griffiths’ nostalgic memoir revolves. Coming along for the ride, we have guest appearances by dodgy bookmakers, fast racehorses, slow tortoises, gregarious Jesuits, and a host of other fascinating characters. Griffiths’ story takes us on a journey through pre and post-independence India: from her childhood spent in railway “hill stations”; to adventures in the horse-racing world of Calcutta in the 1950’s and 1960’s; to building her dream racehorse stud farm with her husband Mike in the hills of rural Bihar. A final transition to life in Canada forms the bookend to a joyous and poignant read.

Imtiaz Fiona Griffiths was born in Hyderabad, India, to Mr Najmuddin Salman Tyabji, Chief Engineer of the Eastern Railway, India, and Mrs Mona Tyabji, his Scottish wife. Much to the amazement of the rest of her family, she developed a love and fascination for horses from a very tender age. She has spent a lifetime in the saddle: from winning pony races in rural Indian hill stations as a child to being an accomplished amateur jockey in Calcutta to winning top endurances races many years later in Canada. She married the great love of her life, Michael “Mike” Griffiths who, with his ever-present sense of humour, would jokingly say it was cheaper to marry her than to pay her top wages for riding his racehorses. Since moving with Mike and her two young children to a ranch in Kelowna, British Columbia, she has taught generations of children to ride and share her love for horses. At the ripe young age of 83, Fiona still rises with the sun to take care of her animals and continues to look forward to annual visits back to the country of her birth.

“Saturday evening curry dinners” have been a staple at the Griffiths’ Kelowna ranch ever since that day in 1982 when Mike invited in the workers building the new stables for dinner. Along with the sumptuous food for the assembled hordes, stories of days gone by are served up as a matter of course. It is those stories and the memories they trigger, along with regular encouragement from Alex Wales (her vet) that her experiences would make a good book, that formed the inspiration for this memoir.

The Hills Around Me has been nominated by our staff as one of their favorite books.