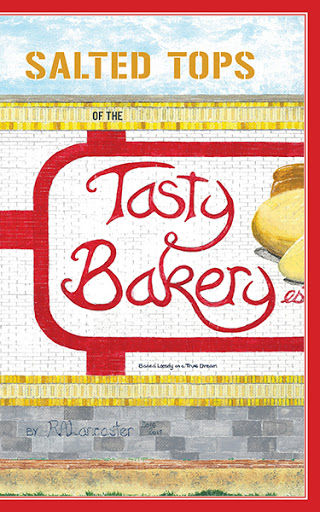 Salted Tops of the Tasty Bakery
by R. Allen Lancaster

Small town America in the summer of 1946, three veterans plan on re-opening a family bakery that closed during the Great Depression.

Youth who’ve been using the building take issue to the bakery opening. Two decide they’ll burn the place down. Their failed arson attempt ends up with 12yr old Jonathon getting caught and put to work, by the veterans and his war widowed mother, Clair.

The day of labor turns into a paying summer job for Jonathon and Clair. Causing mixed feelings amongst Jonathon’s friends that lead to gossip, vandalism, a fight, further arson and eventually murder.

A coming-of-age story full of distinct, realized characters. Reminding us to value honor and integrity over appearance and perception.

Rob resides in the Upper Canada Treaties area of Southwestern Ontario, Canada, harnessing what creative energy he can to dabble in various arts. In 2009 poorly self-published A Rogue's Tales including interior artworks. Please stop reading this and enjoy 'Salted Tops of the Tasty Bakery': it's at least been edited.