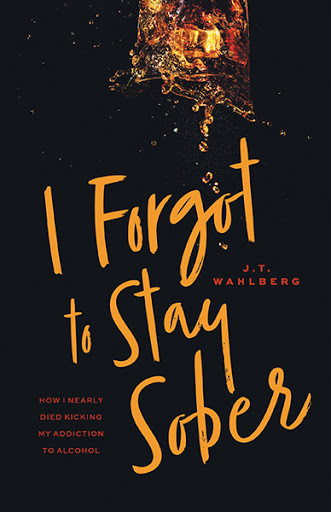 I Forgot to Stay Sober
How I Nearly Died Kicking My Addiction to Alcohol
by J.T. Wahlberg

After two decades of mental, emotional, and physical afflictions, J. T. Wahlberg had had enough, and he was all set to end his twenty-year addiction to alcohol. There was just one problem: he “forgot” to research the potential risks of detoxing on his own without any medical supervision.

Armed with cans of Campbell’s Chunky soup, plenty of water, and a few tips he had picked up from the movie Trainspotting, he hunkered down in his apartment for what he imagined would be a couple of days of pain followed by a life of sunny sobriety. Instead, it’s a miracle he survived to tell his story.

In between describing his harrowing do-it-yourself alcohol withdrawal experience, Wahlberg recounts how and why he became addicted to alcohol in the first place, the negative effects his addiction had on his health and his personal and professional life, and his unconventional approach to sobriety over the past six years. He also offers a blistering critique of alcohol’s socially accepted and yet destructive role in society and urges readers to reconsider their relationship to this highly addictive substance.

J. T. Wahlberg wrote this book to help people understand what to expect when they decide to change their relationship with alcohol. He also hopes this book will serve as a warning to readers that if they want to end their addiction, they should do so in consultation with their doctor.

J. T. lives in Port Credit, Ontario, with his fiancé, and he has “forgotten to drink alcohol” for the past six years.

I Forgot to Stay Sober has been nominated by our staff as one of their favorite books.