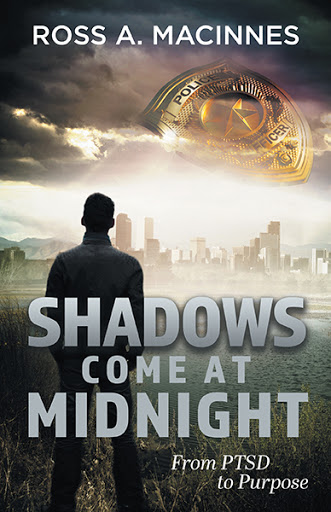 Shadows Come At Midnight
From PTSD to Purpose
by Ross A. MacInnes

At seventeen, Ross MacInnes stole a car and was caught. At nineteen, he was sworn in as a member of the esteemed Royal Canadian Mounted Police. And by his thirtieth year of police service, he was a commander in the organized crime division of a major urban department.

Shadows Come at Midnight is a memoir like no other. Here is an intimate account by a retired police officer about a life filled with trauma that originated from both within and without. Here are stories of tragedy and unimaginable sorrow suffered by a man who folded his anguish into his soul.

The stories of grief, terror, humor, and compassion will move you in ways you never imagined and will hold you spell-bound. The roller-coaster of the author’s journey is mesmerizing.

On his first posting as an RCMP Officer, his partner was murdered. As a result, he began to take extreme risks in his work, and there was no relief for the nightmares except booze. He quit the RCMP and for four years searched for an occupation that would give meaning and purpose but was unable to find it. Then, determined to face down his demons, returned as a Police Officer with the Calgary Police Department.

This is not a self-help book, but a story of a journey through mental and emotional suffering to a life lived with purpose and joy.

It took MacInnes years to understand the price he’d paid, and to realize that certain injuries heal, but that PTSD, OSI and moral injury can only be managed, never mended. He shares the experiences he endured so others can realize they are not alone with their own shadows.

Now retired, Ross MacInnes and his wife Dee, operate a ranch dedicated to the healing of trauma survivors. They share their 100 acres, bisected by a river and carpeted in old-growth forest, with twenty-eight horses, two German Shepherd dogs, three cats, a tame raven, and a wild turkey that comes into the corral while they’re training horses or conducting equine clinics.

He teaches classes across Canada on the methodology of equine-assisted learning as applied to trauma. He’s received numerous awards for his service, including the Queen Elizabeth II Medal for Community Service, the Fellowship Award in the International Scouts Foundation, the Rotary Club Man of Integrity Award, and an award from the United Nations.

He’s written three previous books: I Am Cadillac: Life Lessons from a Horse, The Other Side of Here: A Family’s Journey, and Children in the Game: Child Prostitution, Strategies for Recovery.