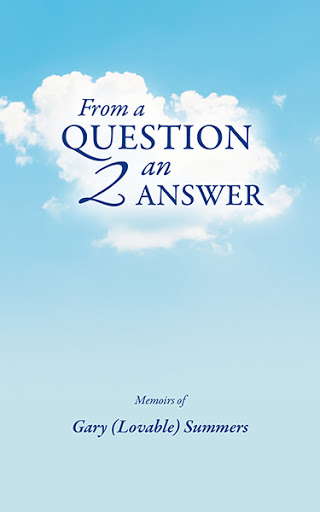 From A Question 2 An Answer
by Gary (Lovable) Summers

From A Question 2 An Answer begins with the author asking why his mother died at such a young age, and ends with the realization that, throughout his life she was always there. This is an autobiography framed by the premature death of his mother, but it also reveals other premature deaths in the authors life: his infant twins and his adult son. Considering the authors somewhat rough start into adulthood, he feels that he has achieved and experienced great things and much success; all be it, and mostly by the skin of his teeth. That skin provided by his mom and of course his dad, seemed to be brushed by them every day of his life.

Gary Summers presently resides in Niagara Falls, Ontario; with his wife Barbara. Their daughter Vicki and her soul mate Derek, live nearby in Mississauga. Gary and Barbara are blessed with two wonderful grandchildren, Daniel and Catherine. Over the years Gary's interests and hobby's have varied greatly, almost as varied as his life; from horse back riding, playing tennis, playing the guitar, oil painting, model ship building, model airplane building/flying, bike riding and traveling. Having traveled extensively throughout Gary's working career, the priority now is leisure travel with emphasis on European River Cruising. At the end of each day Gary's most relaxing and rewarding exit, is through reading and prayer.