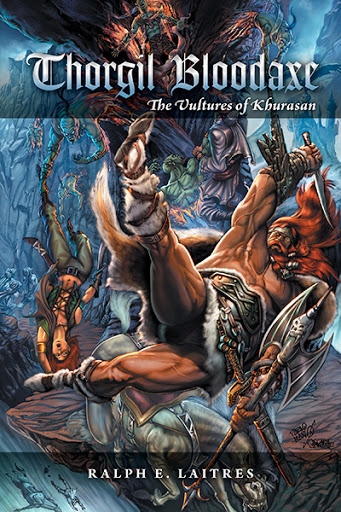 Thorgil Bloodaxe: The Vultures of Khurasan
by Ralph E. Laitres

In a savage world ruled by the sword, the mercenary leader Thorgil Bloodaxe stands apart, a man feared and respected across all the bloodstained lands from west to east. Well aware of his reputation, it is to Thorgil that the Caliph of Baghdad sends an emissary, his high commander, Rafi ibn Abdallah. The Caliph decides he must end the depredations of the rebel leader Ya’qub and his fanatic followers, the Vultures.

It is said of Thorgil that he has fought in so many battles during his lifetime he cannot remember them all, so what is one more? He does not hesitate to accept the commission and, with his warriors, embarks on a hazardous, bloody journey to the Khurasan Mountains, guided by Rafi…who has a secret plan of his own. Along the way, they draw the ire of the Cilician pirates, who hound them from the port city of Latakiyah in Syria to the foothills in Khurasan. They face treachery, battle, and sorcery even before they face the Vultures themselves in their massive mountain fortress.

The Vultures of Khurasan takes you on a glorious sword-and-sorcery adventure alongside Thorgil and his warriors, with page after page of neverending action, accompanied with illustrations by the renowned artist Pablo Marcos.

Ralph E. Laitres has been a fan of fantasy sword-and-sorcery books since he was a young teen in the 1970s. The larger-than-life characters created by Robert E. Howard, like Conan, Cormac mac Art, Kull, and Bran mak Morn, made an impression that has remained with him through the years.

A former Marine and corrections officer, he is intimately familiar with what it’s like to lead men into situations where you are responsible for their wellbeing and lives—experience that adds gritty realism to Thorgil’s adventures.

Laitres lives in Plainfield, Connecticut, with his wife, and has four grown children. The Vultures of Khurasan is the third book in his Thorgil Bloodaxe series, following Enter the White Queen and Shadow of Death, also published by FriesenPress.