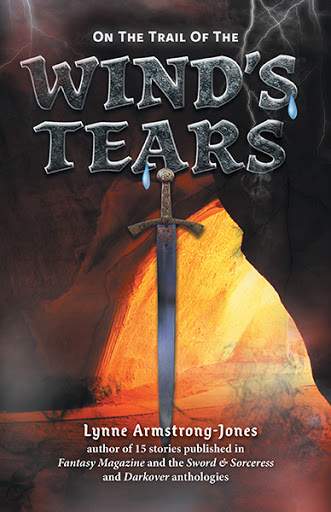 In On the Trail of the Ruthless Warlock, a band of warriors and two sorceresses—with advice from the Witch of the Great East Wood—joined forces to battle a powerful warlock. Now they are called to a new quest when sorceress Veras senses something strange; tears in the wind. The Witch needs their help!

With her new husband the swordsman Nico and the sorceress Creda, she and their warrior friends travel to the Great East Wood to face new challenges . . . a powerful force is trying to seize control of the weather!

While they struggle against this force, Veras and Nico face their own challenges as they adjust to married life and Veras's surprise pregnancy, all of which is complicated by the presence of sorcerer Xyron—Veras's former lover. Can the group overcome their doubts and differences to find some way to protect the Great East Wood and the surrounding areas?

Deeply-realized characters, compelling, wonderfully fluid narrative, and crisp prose complement the tightly crafted plot, which thrills while probing issues of individuality, duty and morality. By turns dark and surreal, this fascinating tale will stay with readers long after they turn the last page."

"Armstrong-Jones focuses on a nuanced portrayal of Veras and Nico's relationship, while also illustrating the perils of a natural world out of balance . . . A thoughtful tale that eschews bombast in favor of measured storytelling."

Lynne Armstrong-Jones is the author of the well-received fantasy novel On the Trail of the Ruthless Warlock. She wrote this sequel in response to comments from readers wanting to know what happened next to the characters they enjoyed in the first book. She lives in London, Ontario, Canada, with one husband and three cats.