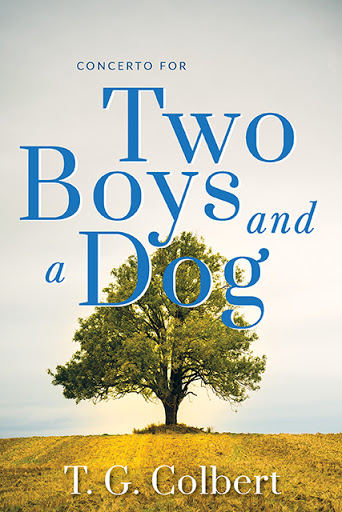 Concerto for Two Boys and a Dog
by T. G. Colbert

Growing up in Illinois in the 1950s and 1960s, Bob and Jeff are intimate friends who are separated at age eight by a family tragedy that breaks their world apart. Reunited in high school, they both have changed and each is afraid the other won’t like him anymore if he knows too much about him. In a story of self-acceptance, reconciliation, and the creative power of abiding love, they come to realize that neither of them had anything to worry about.

Terry Gordon Colbert took his undergraduate degree in English at the University of Illinois, Urbana-Champaign, where he was impressed with James Joyce's Portrait of the Artist as a Young Man and was inspired to go and do likewise. One of the paragraphs he drafted back then, during the 1967-68 academic year, still stands as the opening paragraph of this book. Graduation, the war in Vietnam, and the peace movement intervened, and he laid the novel aside for several years. He worked on it again in the 1980s after he and his partner settled down, laid it aside while they migrated from Illinois to Kansas to California, and was moved to rewrite it by the satisfaction he got from his Icelandic novel, The Aim of Art.

Throughout the process, he was inspired by the work of Joyce and other great writers, especially Hemingway, and was motivated by the desire to create a work of literary art that would give him the aesthetic pleasure he got from reading those authors.

In 2011, Weavers Press in San Francisco published The Aim of Art, a fantasy on his parents' courtship and his father's tour of duty in Iceland during World War II. In 1999, Colbert contributed a chapter to a book on long-lasting gay male partnerships, When Love Lasts Forever, edited by Merle James Yost (Cleveland, OH: The Pilgrim Press).

Colbert lives in San Francisco with his partner of 43 years.