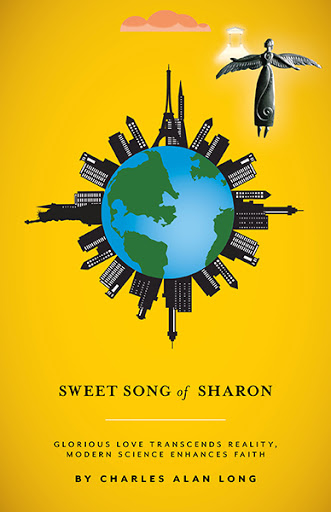 SWEET SONG OF SHARON WAS OF HER GLORY BUT MUCH MORE

Sharon and Charles were born, educated, and in love in fundamentalist Kansas, both attending a conservative protestant church. Tragedy and poverty forced her marriage to another. It eventually failed. The supernatural event seemed to bring the long separated pair back to an impossible love. Odds against were their ages and health, finding each other after 65 years of separate adult lives, and so many years of unrequited love. Reunited, the love ecstasy was so incredible for two people bonded hopelessly for many years, that too was a miracle. It defied age, poor health, her family, a suicidal dying woman, a thousand miles distance between our homes.

There is much more arising from this miracle. The poet and Sharon considered it love from heaven. After sharing bliss and happiness, the poet wrote a poem of Sharon’s momentous, magnificent song of love. After becoming a naturalist with math background and great giants teaching sciences, some observed “miracles” could not be explained. Since college he was also a transcendentalist, and the suddenly revealed supernatural events from Quantum Physics made God and Jesus make sense. But many fundamentalists believe every word in the Bible.

Genesis was written by Moses with two odd myths on creation. A preacher who said that this 12 billion years old universe was only 6000 years. Some accept Egyptian science long before science was invented.

Joyously I found an obscure scripture, the truth about Moses from a dying martyr “full of the holy spirit”, face shining like an angel. “Moses was set out outside to die and then raised by the Pharaoh’s princess. All his learnings were Egyptian wisdom” for a full 40 years. He was 80 before God began to give him His holy word. Now that Science is amenable on the supernatural, God may be tired with an evil war against science based on Egyptian myths. Perhaps, thanks to God, we can trust one another. Revelation is logical. And Sharon’s song of love is holiness and love, but was not only for the poet. But love has its glory.

Over 60 years of professional experience in teaching, research, scholarship; in such a range of subjects he received the highest award of the venerable Marquis Who's Who, the Albert Nelson Marquis Lifetime Achievement Award, and numerous other honors. In science his contributions are legion, from palaeontology to rocket science and flight, from zoogeography to blood cells, from fractals in evolution to natural history of badgers of the world, from religion and the crosswinds of science to the origin of lactation, from the rank of captain in the Army to studies on energy and gas coefficients in relativity. Sixty years of poetry was compared with Walt Whitman and Thoreau. Beyond a wonderful love story in the Sweet Song of Sharon the demonstration of miracles seem amenable to quantum physics. Fundamental religions may see that wonders of modern science hone religious faith manifest even by the holy spirit in Acts 7 comparing Moses as Egyptian prince and later with God. Sharon's song is holiness related to this new revelation.