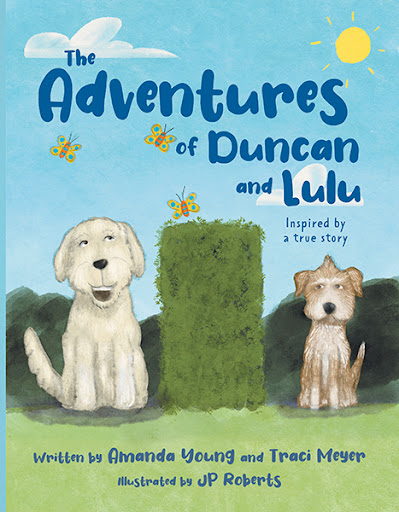 The minute Duncan sees his new next-door neighbor, Lulu, his heart jumps for joy. The goofy Goldendoodle is determined to befriend her, but rescue puppy Lulu doesn’t know what to make of him. Happy-go-lucky Duncan loves rainbows and butterflies and always sees the bright side of life . . . while Lulu is scared and shy because she’s had a hard life. She doesn’t know how it feels to be truly loved or have a friend.

But Duncan won’t give up so easily. He does everything possible to show Lulu that he wants to be her friend. Will Lulu find the courage to move past her fear and let Duncan in, despite their differences?

The Adventures of Duncan and Lulu is a heartwarming story about courage, friendship, and the power of kindness. Based on the true story of two dogs, Duncan and Lulu remind us to take chances and open your heart to those who might be different than you. After all, you don’t know someone’s story and how they feel inside—but you can reach out in friendship.

Traci, a busy mother to three boys, was convinced by her oldest that he “needed” a dog. Little did she know, Duncan the Goldendoodle would steal her heart and make her realize that she needed him, too. He changed their lives the minute he walked through the door and became Traci’s fourth child in the center of their Hanukkah picture.

Amanda is a native Australian and mother to a fabulous, free-spirited daughter. She and her family love animals and have always had a dog. When an abused rescue named Lulu came into their lives, Amanda realized how much she would need to reorganize her life to help heal Lulu’s heart and earn her trust. With much patience and time, and the help of the playful Goldendoodle next door who wouldn’t give up—Lulu began trusting her new environment.

The love shared between these dogs is so special that Traci and Amanda wanted to share this journey of acceptance, trust and second chances. Little did they know how much fun they would have on the doggie playdates. The two have shared many laughs and have become great friends. They have even considered putting a doggie door between the two back yards. Traci and Amanda intend on donating a portion of each sale to the Last Call K9 Rescue.

The Adventures of Duncan and Lulu will be available in the FriesenPress Bookstore soon.