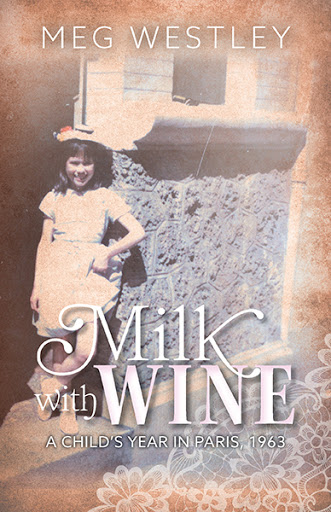 Milk with Wine
A Child's Year in Paris, 1963
by Meg Westley

In 1963, eight-year-old Meg is swept off to Paris for a year with her family. A precocious child raised in an English enclave of Montreal, she speaks no French at all. Her parents enrol her at a strict Parisian school, where she is treated like the village idiot by teacher and classmates alike.

‘Madame examined me as though I were an insect and gabbled at me incomprehensibly. She made announcements. To my horror, the little girls dipped nib pens into inkpots and began to write. Watching my classmates, I tried to copy their actions, never having seen a nib pen before.

I pressed too hard, tore the page, splattered ink and snapped the nib.

Madame seized my blotched notebook and shouted at me. I swallowed back tears. Titters ran through the class.

Madame handed me a pencil and watched as I printed my name.

“Mon dieu!” she muttered. Then she jabbed her finger at the paper and said, “Histoire.”

Realizing this was some sort of spelling test, I printed e-a-s-t-w-a-r-r-e.

She slapped her forehead. “Imbecile!”

Meg is indignant at French customs. Pissoires on the boulevard! Chocolate laced with liquor! Children not allowed to play outside! Forced to learn French, horrified by a tuberculosis diagnosis, chilled by JFK’s assassination, and wistful for friends, Meg struggles to survive. But there are also magical moments: glittering puppet plays in the Tuileries, delicious artichokes, the spectacular film Cleopatra, a quaint house in Montmartre, street urchin friends, and hot baguettes for breakfast. 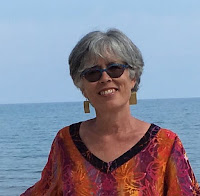 By the time she reached adulthood, Meg Westley had lived abroad for three years (one in Paris, two in South Wales) and travelled extensively in Europe. A PhD in Drama, she has worked as stage manager, professor, coach, writer and editor. Passionate about education and human rights, she served as a school board trustee and president of Dying With Dignity Canada. Her first novel Goddess Fire was published in 2009. Meg lives in Stratford, Canada and has written plays for children, short stories, academic articles and a monthly newspaper column. Her favourite pastimes are playing Dungeons and Dragons, hiking, writing, and travelling.