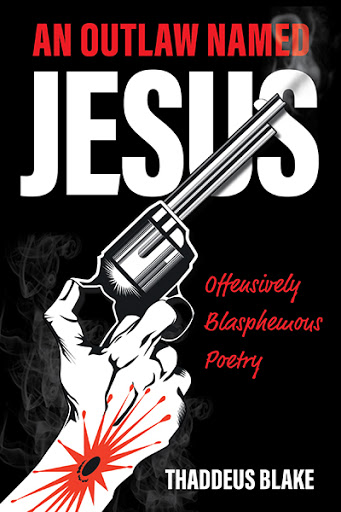 Sometimes satirical and humorous, sometimes tragic and impassioned, these poems are for anyone with a dark sense of humour, a belief in free expression, or simply a love of poetry. In the same way that religion often uses guilt, fear, and shame to restrain the mind against any criticism, this collection uses humour and pathos to free it up and elicit passion and laughter in those who find beauty and humour in the irreverent.

Like many “Christian” kids of the 70’s, Thaddeus Blake grew up with church every Sunday, bible stories, compulsory prayer and scripture readings in the public-school system. He was routinely told that if he didn’t believe in God, and didn’t ask Jesus to forgive his sins, he would burn in hell for all of eternity. This became uncomfortably normal for much of his life, until a growing interest in anthropology, evolution and philosophy forced him to confront his own doubts.

Concluding, not without pain, that his faith was based on fairy tales, he found catharsis in poetry. He quickly discovered that the things he loved about the world remained unchanged, that happiness is possible without God, and that the beauty and joy of poetry is not the exclusive domain of the superstitious or prayerful. He lives on Vancouver Island, British Columbia, with his wife, two kids, and six dogs.