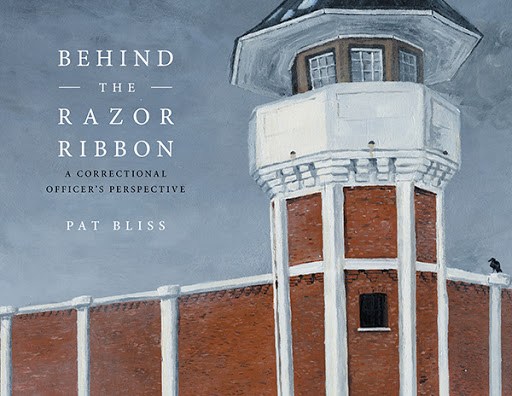 Life inside a Federal Penitentiary is a mystery to most people. Closely governed by rule and law, Federal Penitentiaries are nevertheless complex communities of people who live and work behind the razor ribbon that encircles them. Correctional Officers are among the few people who are part of the daily experiences behind the walls of prisons across the country.

This collection of images of twenty-nine pieces of artwork and their narratives is one retired Correctional Officer’s depiction of that community, and of his experiences working at the Saskatchewan Penitentiary. The artwork, created with various mediums, captures moments and events, experiences and feelings—both traumatic and humorous—that have impacted the artist. This body of work provides a glimpse into what life behind the razor ribbon is like for those who live and work there, and has been a healing journey for the artist who created it.

Pat Bliss is a retired Correctional Officer, having worked for twenty-seven years at Saskatchewan Penitentiary in Prince Albert, Saskatchewan. He has been a professional artist for fifteen years, and has made the exploration of two- and three-dimensional art a lifelong pursuit. Bliss won the People's Choice Award in the 2011 Annual Kyla Art Group Show, and third place in the 2017 Prince Albert Winter Festival Juried Art Show. Two of his paintings were selected for the Mann Art Gallery Permanent Collection, one of which is included in this book. He illustrated the children’s book, The Heart of a Horse, published in 2012 in the United States.

Pat Bliss lives on a hundred-acre farm a short distance from the city of Prince Albert with his partner, Heather, two rescued dogs, and three rescued cats.